The Flying "Pongos" - The End

We were also brought on vacation to for sight seeing and to wind down. 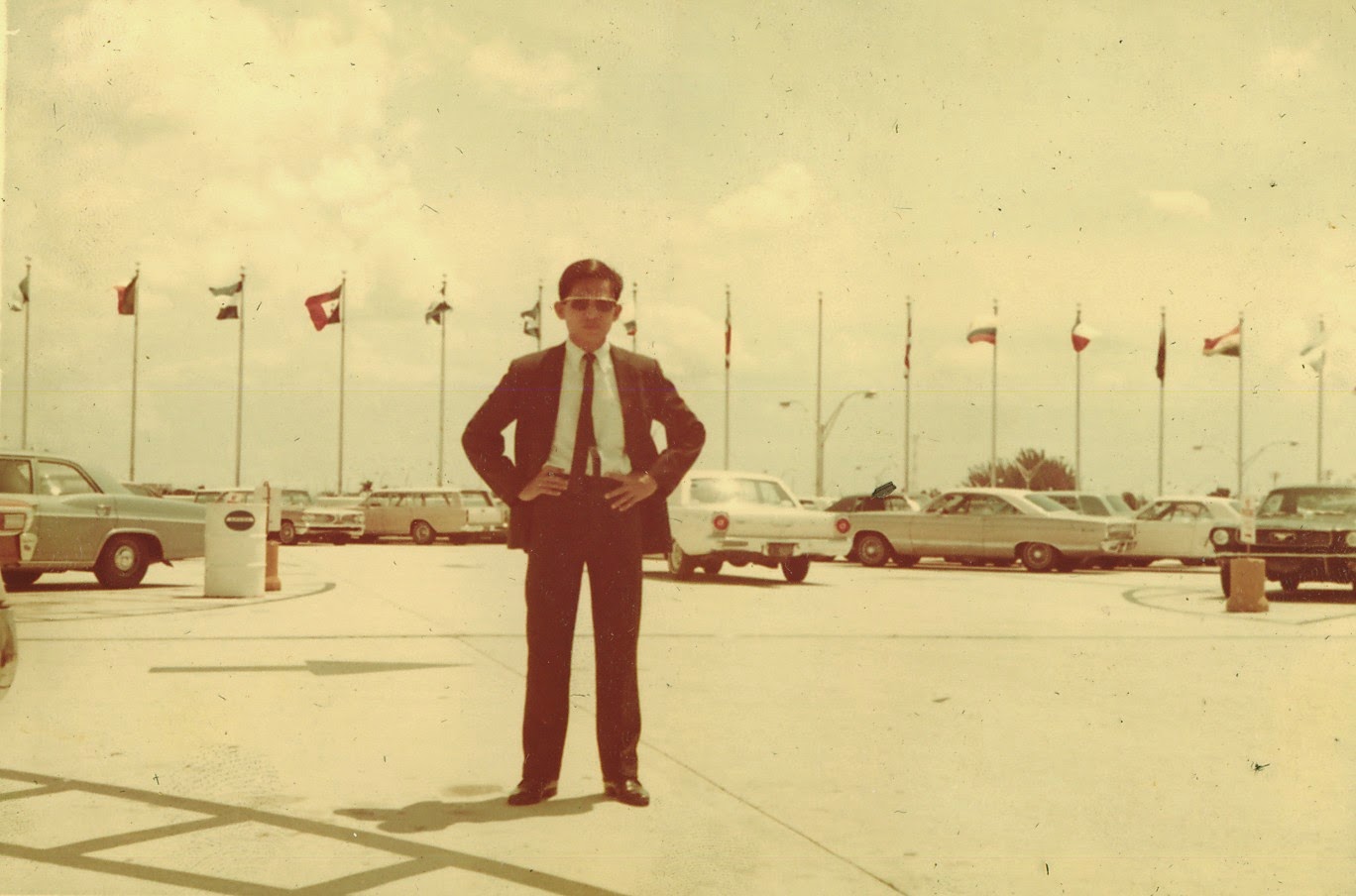 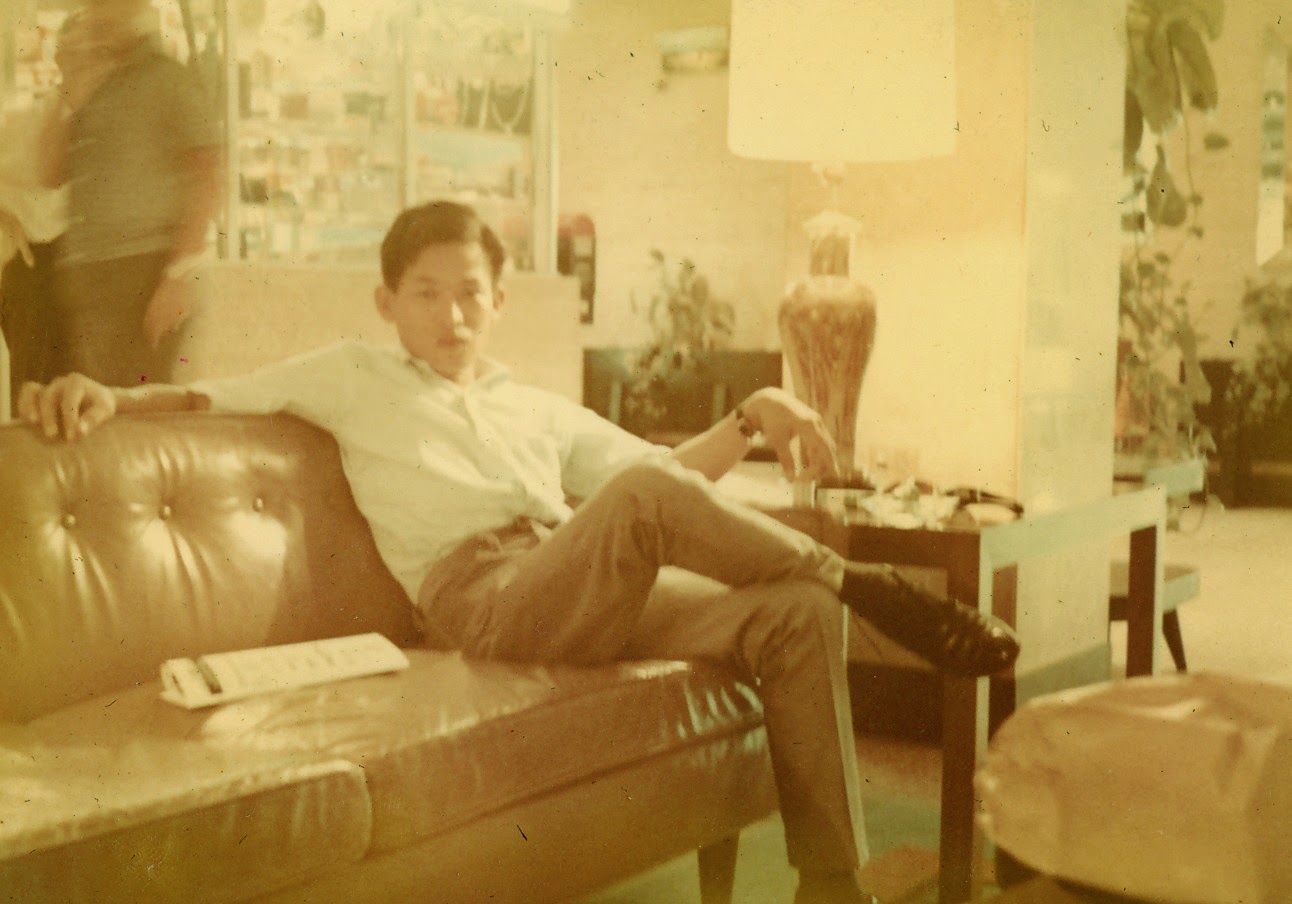 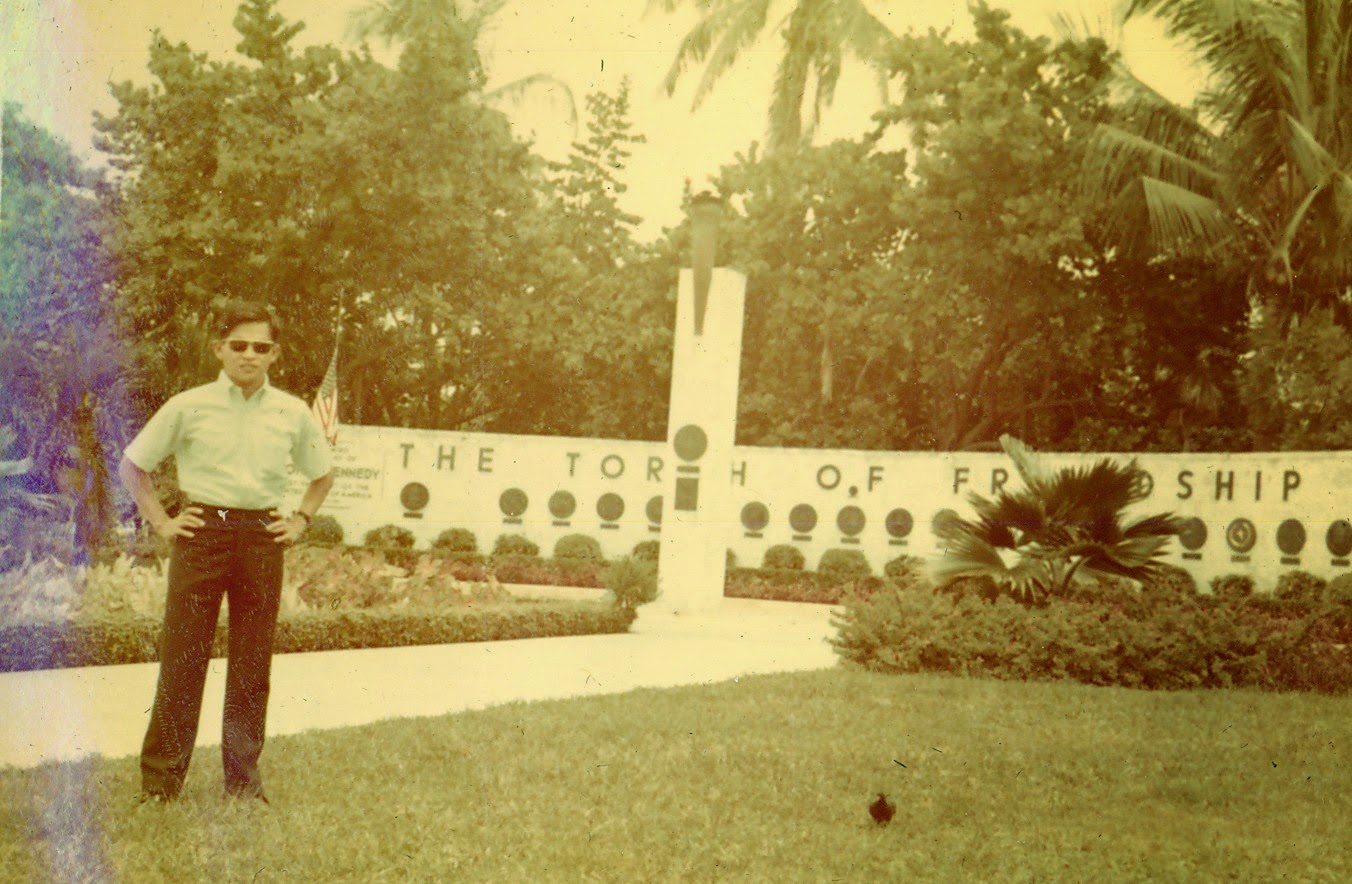 During this time, in the late 1960s, there still existed the colour bar in the . I was refused a room in one of the motel because of my colour although the hotel management does not say so directly. There was “Vacancy” sigh lighted up outside the hotel, but when I went in to check, the manager on duty said that all the rooms were taken up already.

There were also sign boards like “BLACK ONLY or WHITE ONLY” at some of the beaches that I visited.

On one occasion, one of the simulator instructors refused to take me for a lesson, he did not say as such but when I reported to him, he told me to wait and off he went; after a while, another instructor came and took his place. This happened in . In no such thing happened. 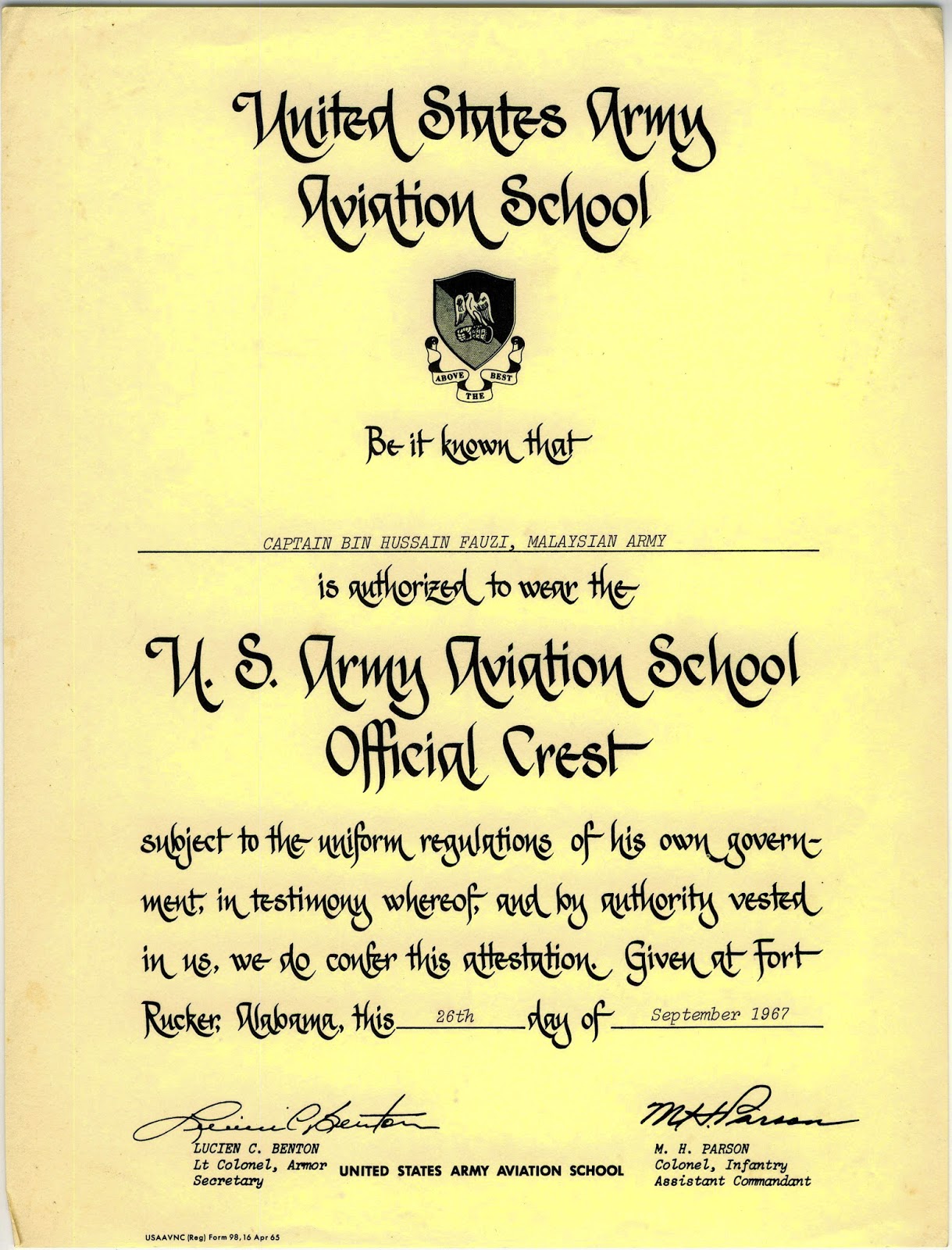 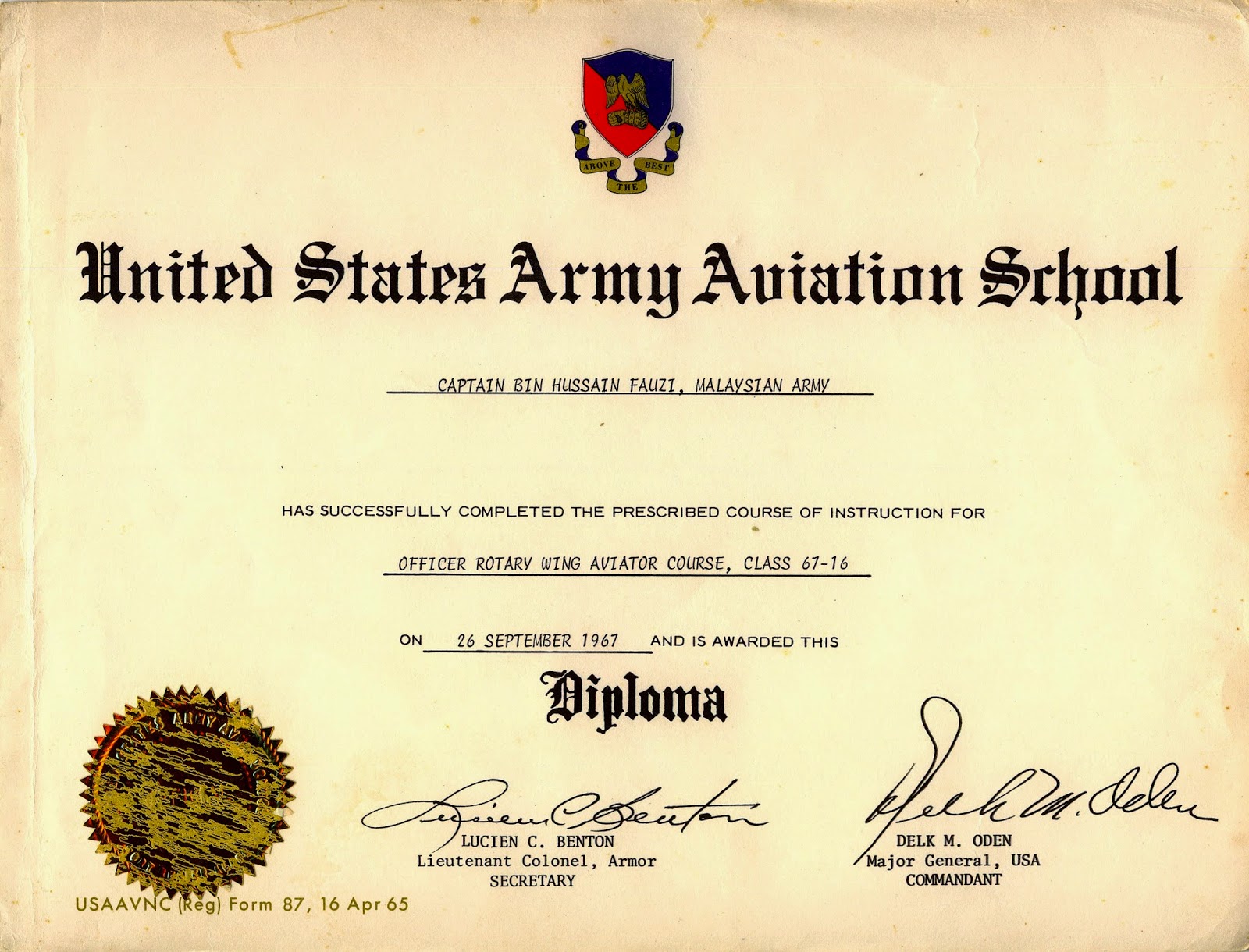 
There were about 200 helicopters at Ft Wolters to cater for the training and they were parked about 2 or 3 km from our classrooms, hence we have to take the shuttle bus to get there. To go there was a problem but to find the helicopter was also a headache because there were rows and rows of helicopter parked in an apron of a few km big.

The bus driver, being an experienced man and had served at Ft Wolters for a long could always be relied upon to find our helicopter.

Although, I found the flying tough initially, I managed to get through the program and graduated to the flying tactical phase at Ft Rucker. 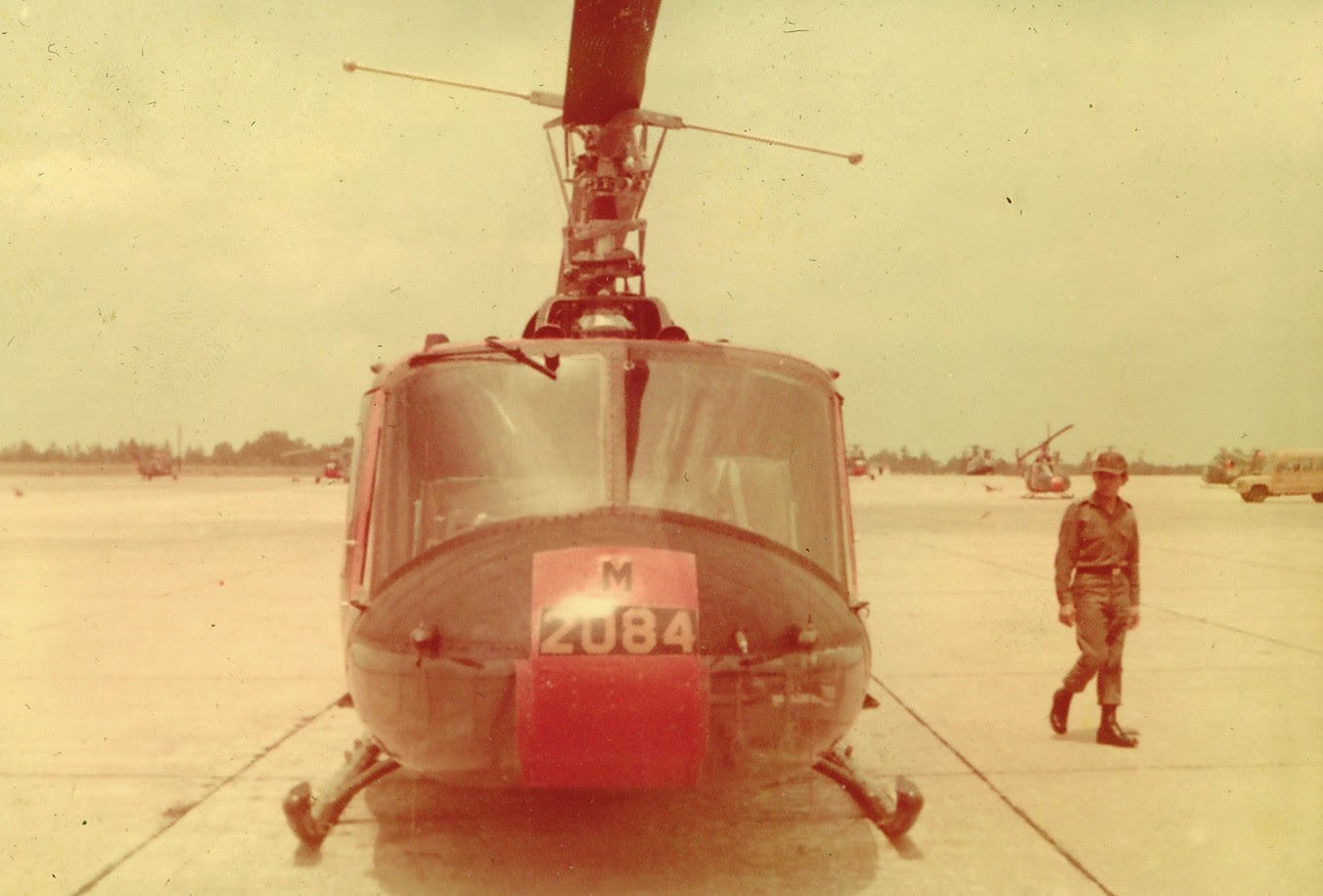 UH 1D Huey Iroquis
At Ft Rucker, all of us were accommodated in the Bachelor’s Officers Quarters (BOQ). Some of the rooms were simple with the bed, tables, chairs and sofa together in one room. I had the pleasure of being given a bigger room with the bedroom and the living room separate. My room also had the kitchenette attached.  So, most of the cooking was done in my room. All the rooms were equipped with a refrigerator and with the bathrooms attached.

This accommodation was very comfortable and was given to us free of charge. 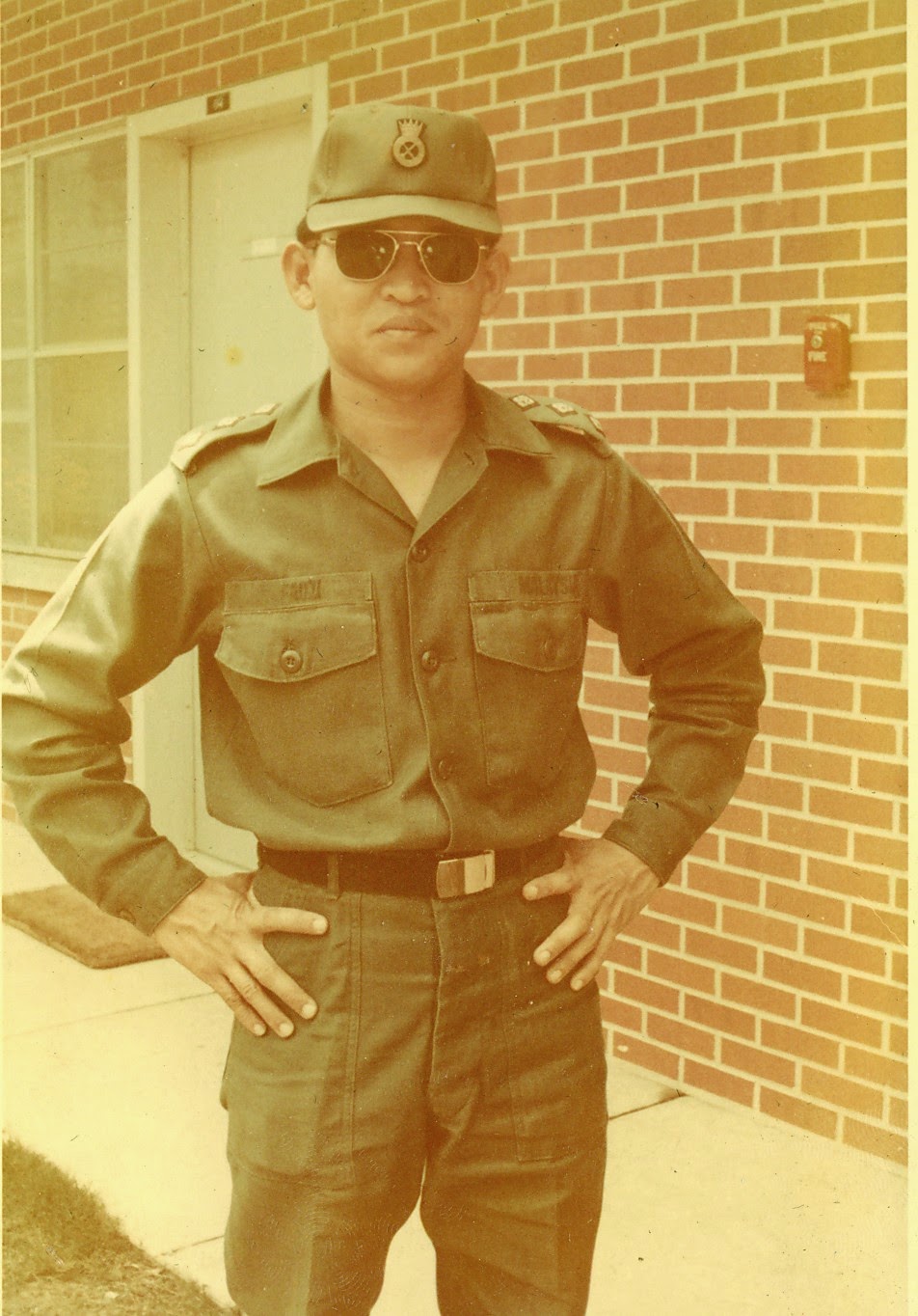 In front of my BOQ – note the flight uniform, we all flew in the OG green fatique

Ft Rucker flying was different from the previous one. We trained on the Iroquois UH 1A  – D series, the same type helicopter that were used in . Most of the flying was done tactically. During the tactical deployment phase, we had to sleep in the field in make shift huts near our helicopters.

This was to simulate the conditions in . If we were attacked even at night, we have to start up the helicopter and fly off to another airfield just like what they did in . 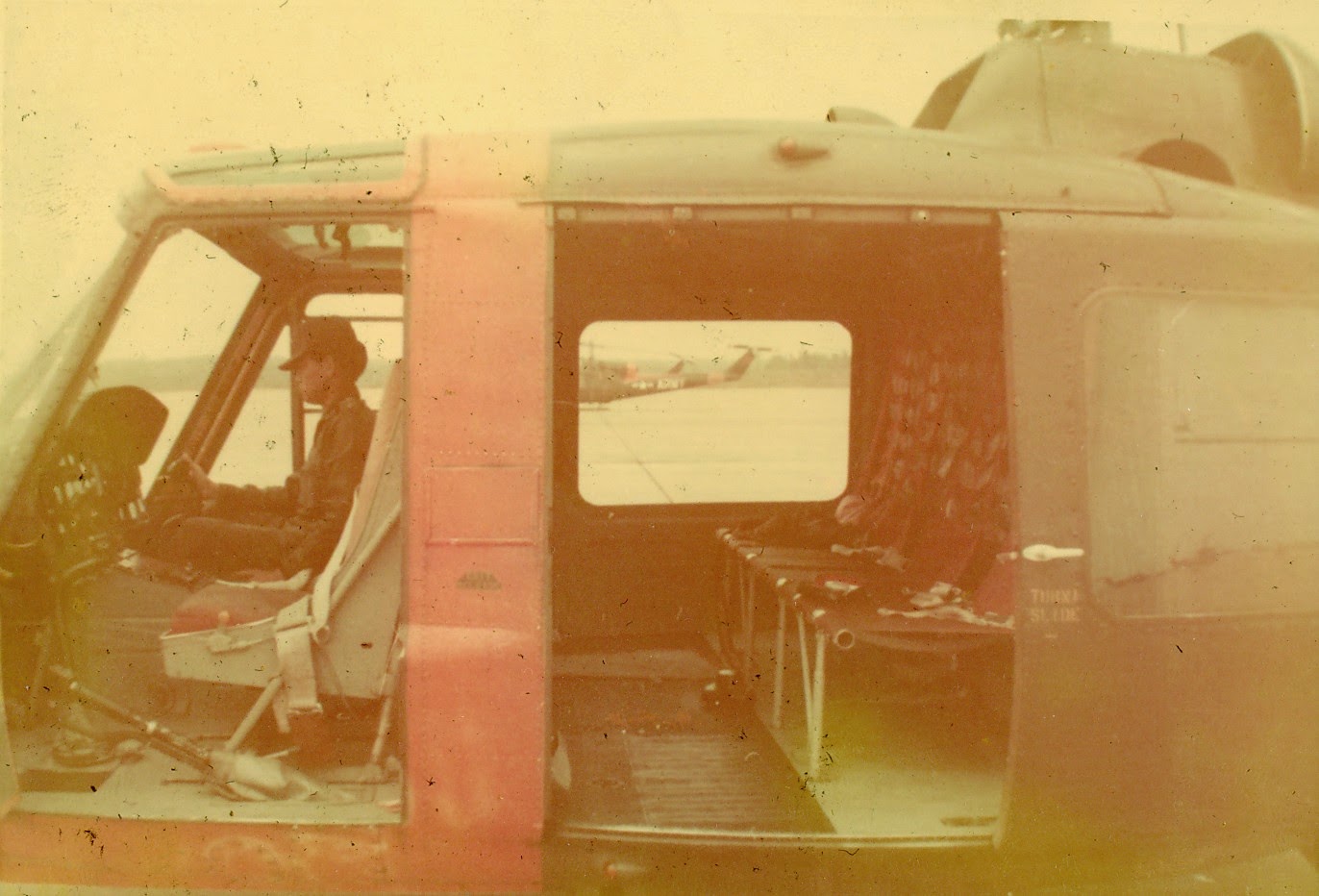 In the cockpit of the UH ID Iroquis

Most of the flying here were done in formation.  The simulated troop lift, medical evacuation, load carrying under-slung were done in formation of 6 helicopters simulating a flight. Sometimes this could be frightening as we were all student pilots and had very few hours on the Huey. We even flew formation at night, though a bit of a loose formation.

During my stay at Ft Rucker and Ft Wolters, there were a lot of crashes, sometimes fatal. The airspace was always busy with helicopters here and there and if we do not follow laid down procedures, accidents were bound to happen. Just imagine a hundred helicopters flying in a restricted airspace by student pilots, anything can happen, so we have to be on special alert all the time. We have to look out for the other helicopters and avoid them if they come too near to us. Sometimes the other pilots become too engrossed in doing their exercises and were not aware of the others in the area. 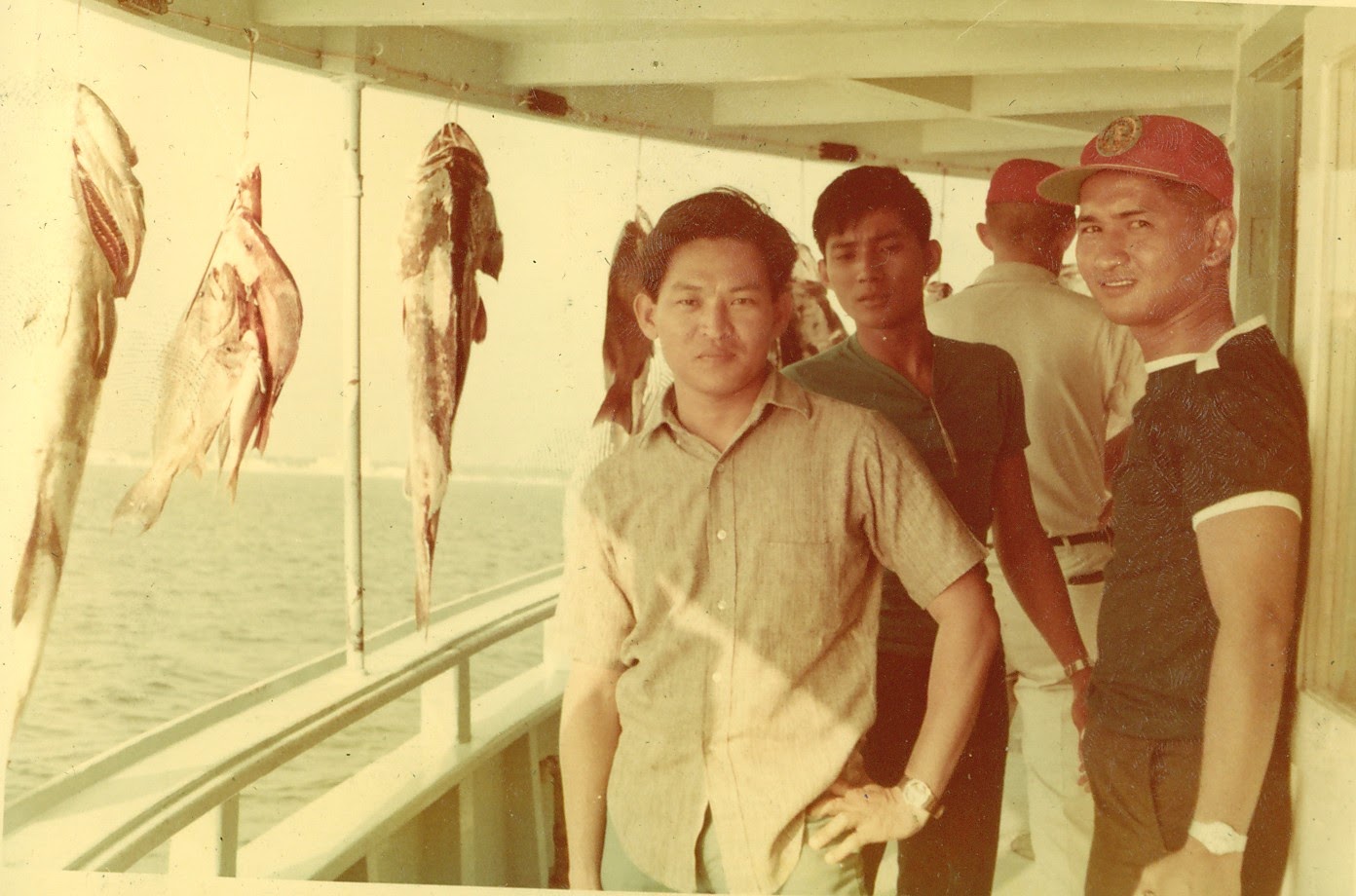 Deep sea fishing at Panama City, the two guys behind me are officers from the Royal Thai Air Force 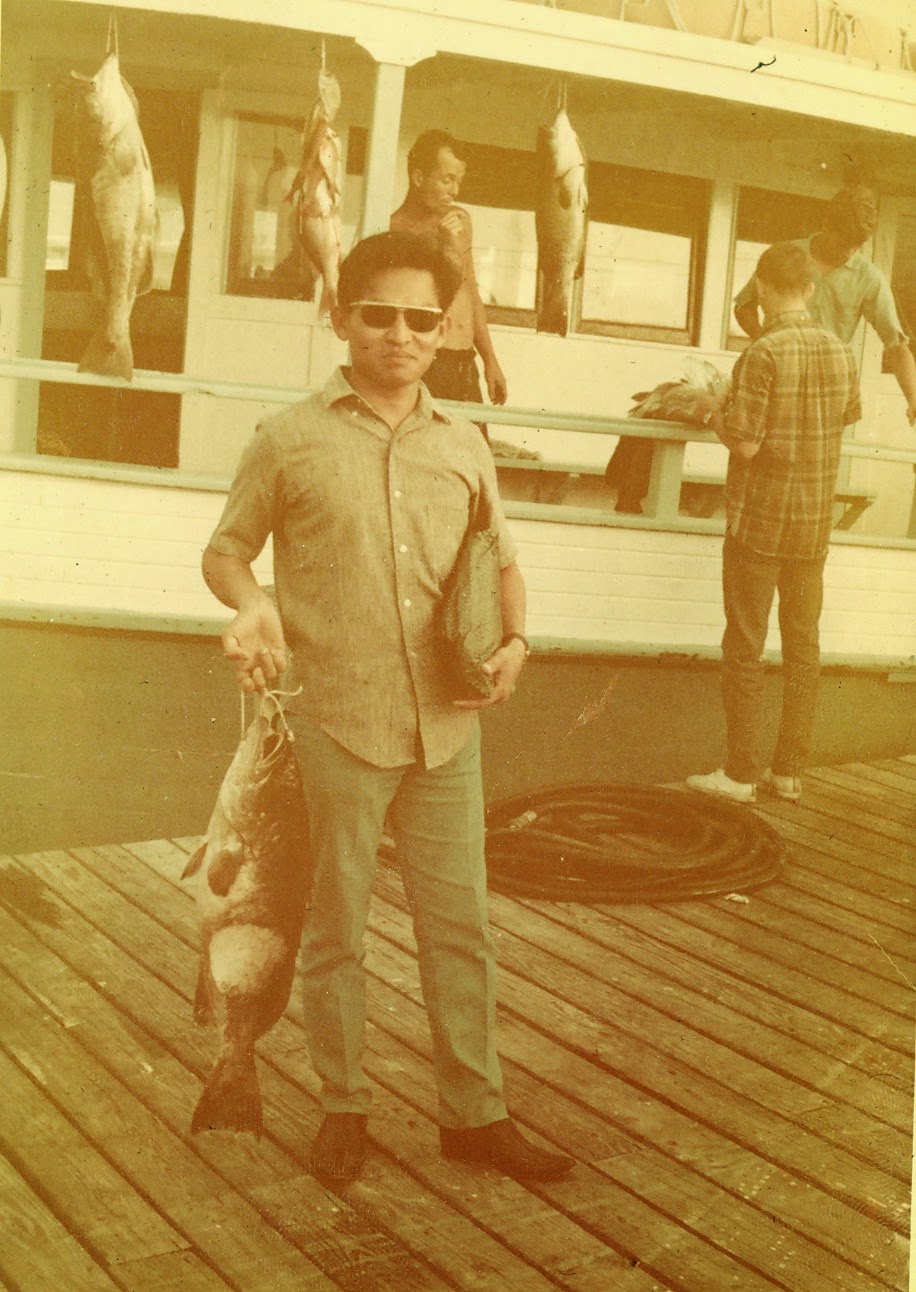 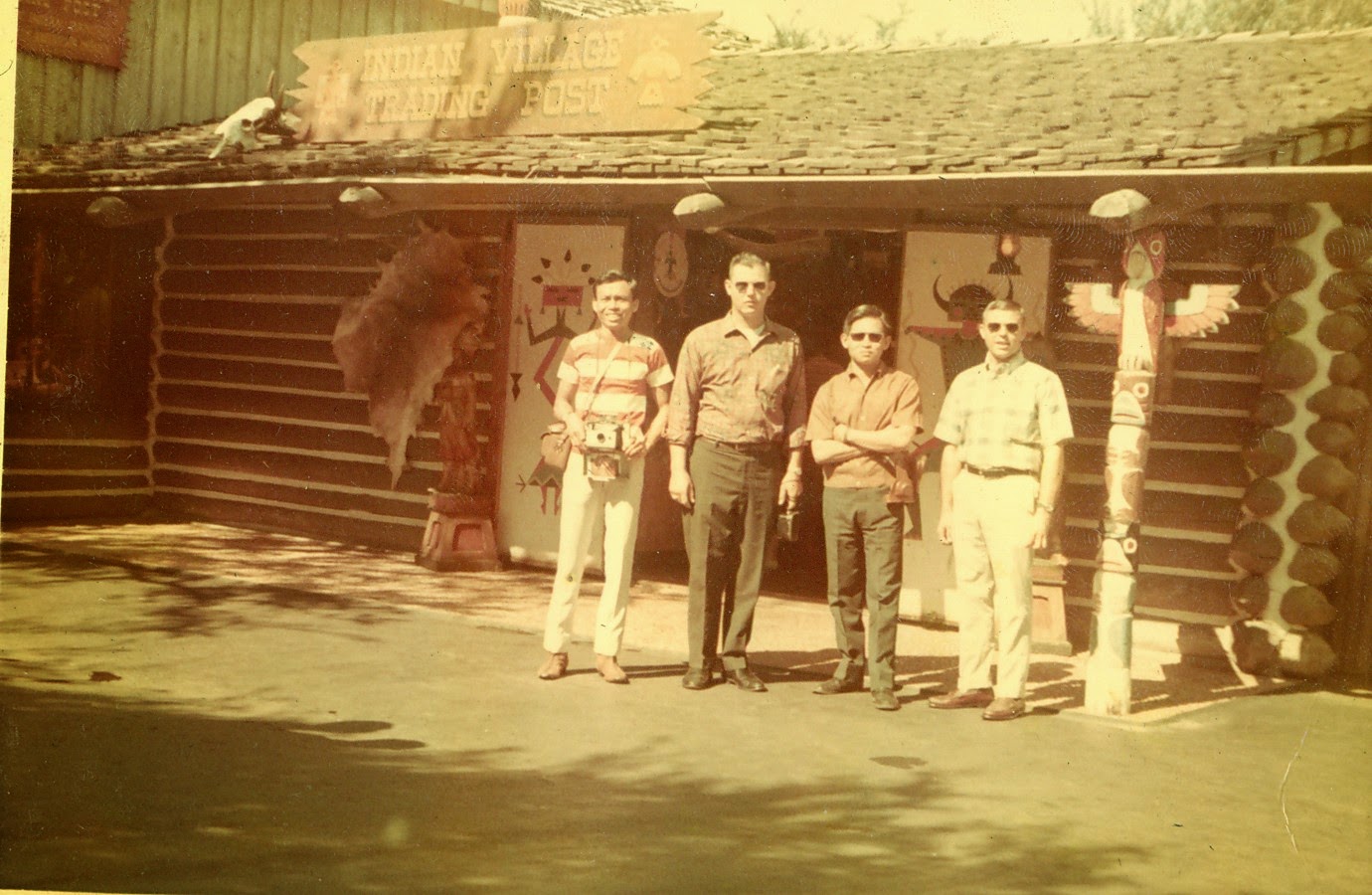 From left Capt Hanafi, 2LT James Thompson, self and 2 LT Steven during the Visit to the 6 Flags of . 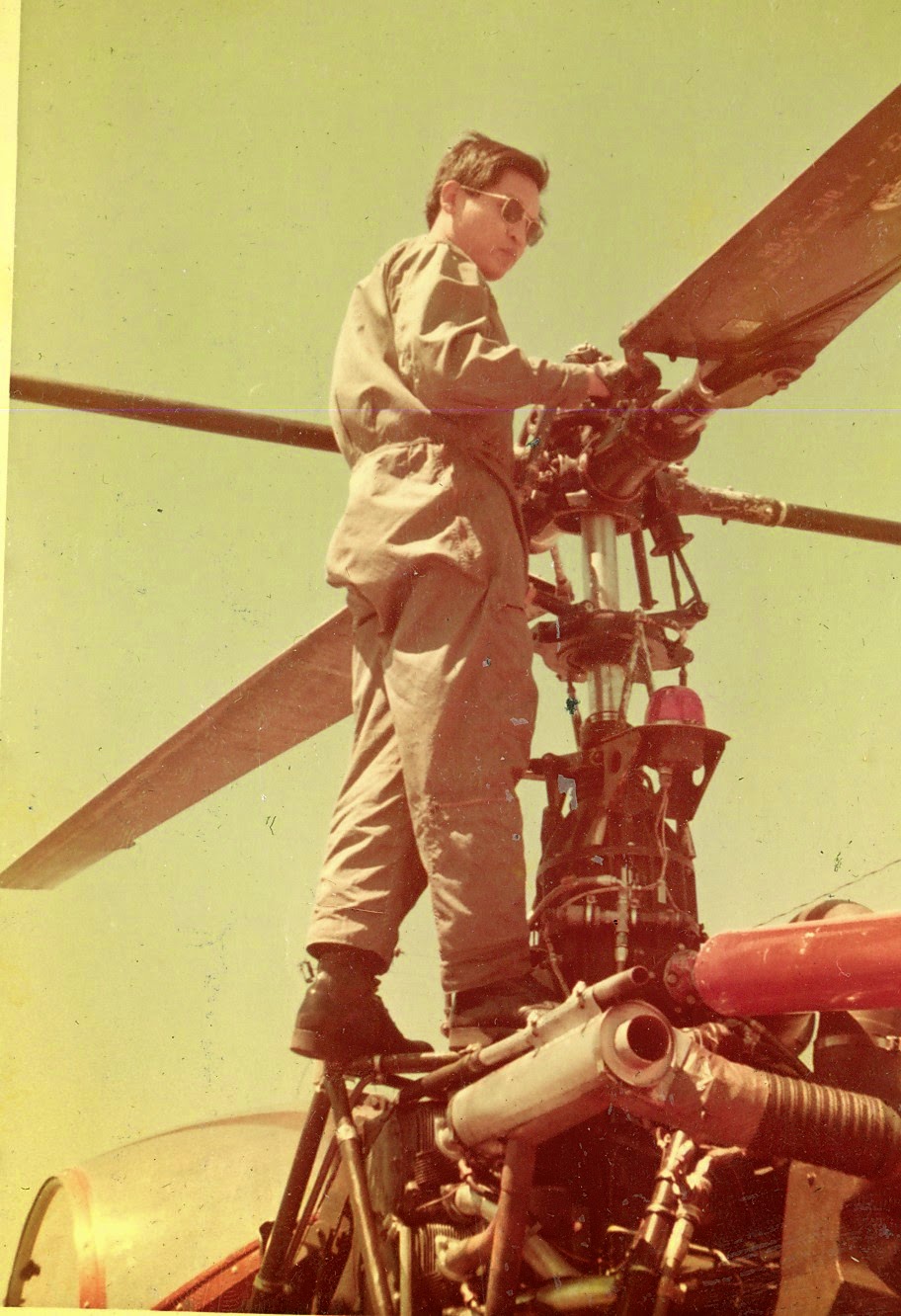 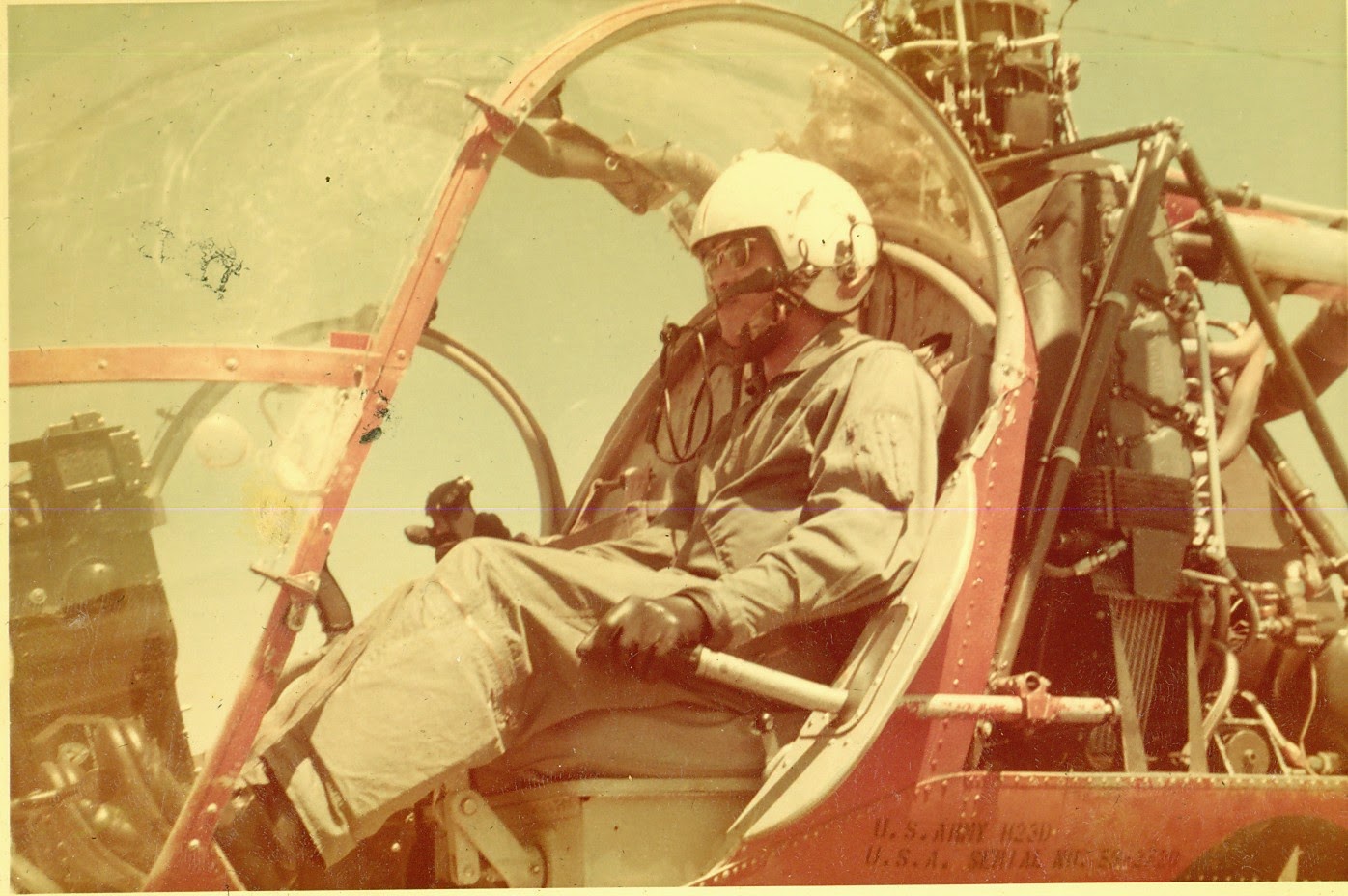 The real heli - OH 23 D Raven, the heli that we flew on our initial training phase.OH 23D Raven, notice that the heli was without doors.

The Raven OH 23D, was a basic bare aircraft. All of them were very old as they were of the Korean War vintage. Most were without doors. In winter, if we were schedule to fly early in the morning, we used to go to our allocated helicopter as early as possible; and if we see that it is without doors, we used to steal the doors from the next nearby helicopter. 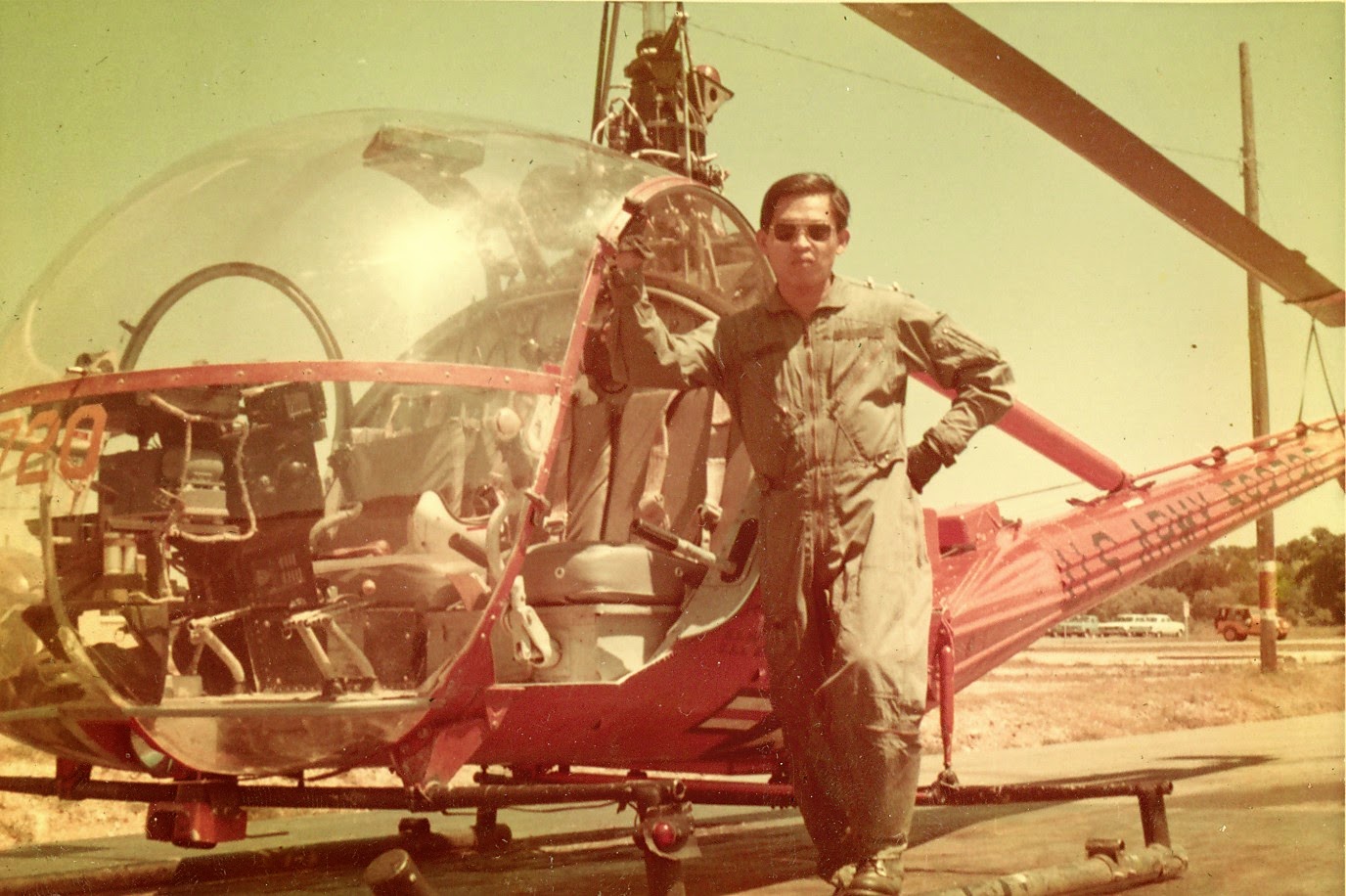 Before flight on OH 23D

What we do was to go to the next nearest helicopter that has doors; jettisoned them and fix them to our helicopter. Sometimes this could be very embarrassing and comical because the owner of the nearby helicopter can claim back his doors, and if we could not find any other replacement, than we have to fly without the doors and suffer the cold winter morning

The opposite happened during the summer time. The weather in Texas can be very hot and we used to jettison the doors of our helicopter so that we could get some fresh cool air in because our aircraft has no air condition.

The instrument phase of this initial flying was done on the Hughes TH 13T. Again this aircraft were of the Korean War vintage also and some of them can be rickety and noisy.

We had to fly 40 hours on this helicopter and at the end of this phase we have to take an exam. Only when we passed this exam, can we graduate and proceed to the tactical phase at Ft Rucker, Alabama. 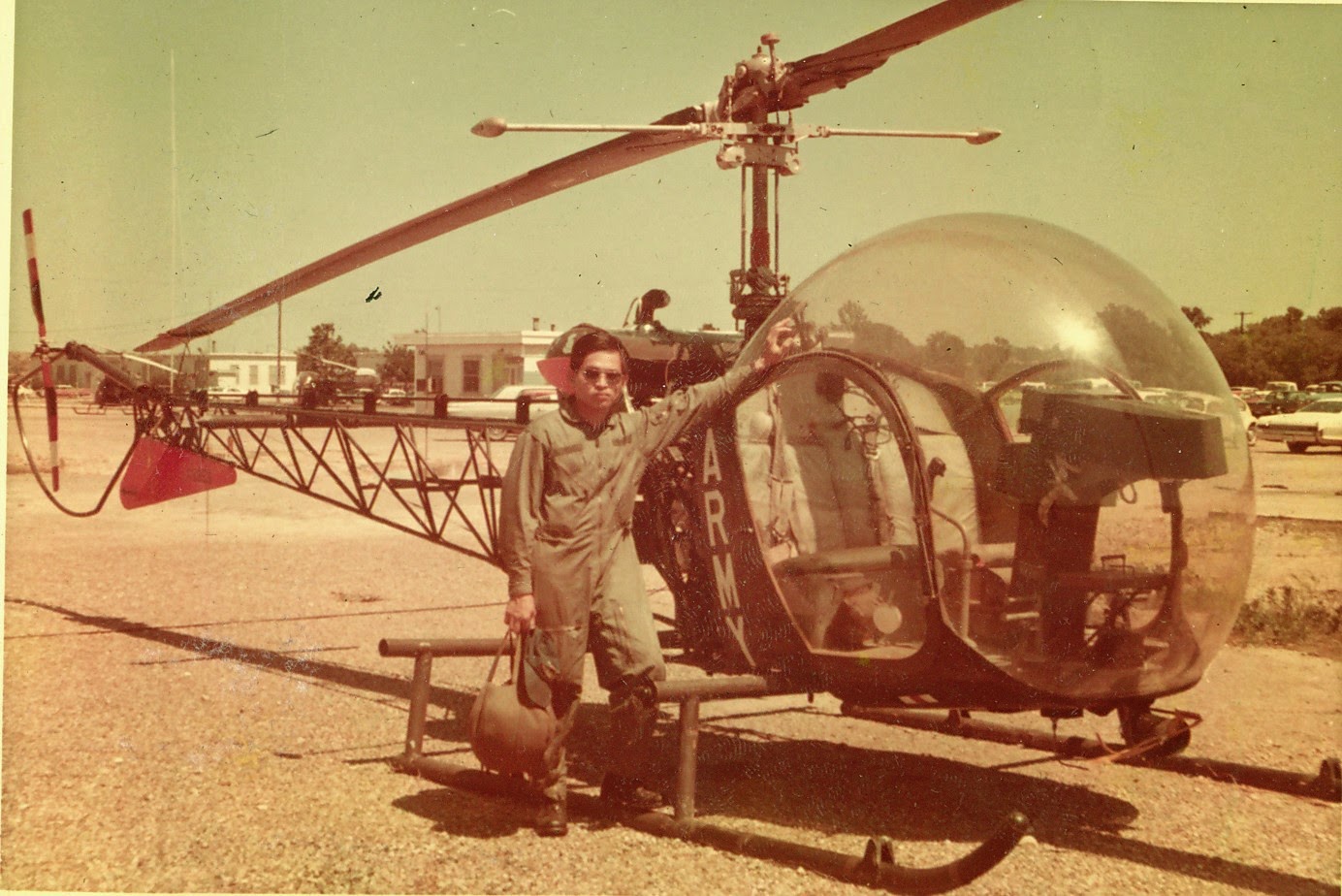 Preparing to fly the TH 13 T Hughes helicopter, I flew my instrument phase on this

Readers....Malaysian government signed a contract with Sikorsky Aircraft Corporation for the procurement of 10 Nuris in 1967. The first batch of 3 Nuris arrived at Port Swettenham in January 1968. During this period, the RMAF was expanding by leaps and bounds. New flying assets were either procured or given FOC. As a result, the Flying Training School, RMAF Alor Setar, was unable to churn out enough pilots to man those wonderful flying machines.

One of the ways to overcome this manpower shortage was to invite army officers to join the air force as helicopter pilots. The successful candidates were sent to Uncle Sam for training. Throughout the period 1967-1969, 7 army officers answered the challenge and were sent to Fort Walters and later to Fort Rucker. Capt Fauzi Hussain was one of them (retired Maj Gen Dato' - Deputy Air Force Chief).

I'm very fortunate that Dato' Fauzi was willing to share his experiences during his flying training days.


Fauzi Hussain – heli flying trg in the US During the year of 1965 and 1966, the Government conducted very intensive ground operations against the Communists Terrorists along the Thai-Malaysian border.

Because of this, the RMAF was hard pressed to support the Army units in carrying out their ground operations as there was not enough aircraft /helicopters and pilots.   To cater for this shortfall, government ordered a squadron of new S 61 Nuri helicopters (18 aircrafts) from the US. As for the pilot, the RMAF decided to recruit them from the teeth arm of the army (infantry, arty, engineers, Rangers) to be sent to the USA for helicopter training.

Many officers from the army volunteered.  The criteria for selection was that the officers must be of Captain rank, have passed their Lt to Captain promotion examination and medically fit. They have to undergo the air aptitude test and medical examination. Those who passed were sent to United States Army Helicopter Training School, Ft Wolters, Texas for basic helicopter training. This first phase of training lasted for 5 months.

After passing my medical and aptitude test conducted by the RMAF, on 1st Jan 1967, I went to the US Army Aviation Flying Training School in Fort Wolters for my basic training and Ft Rucker for my tactical flying phase. 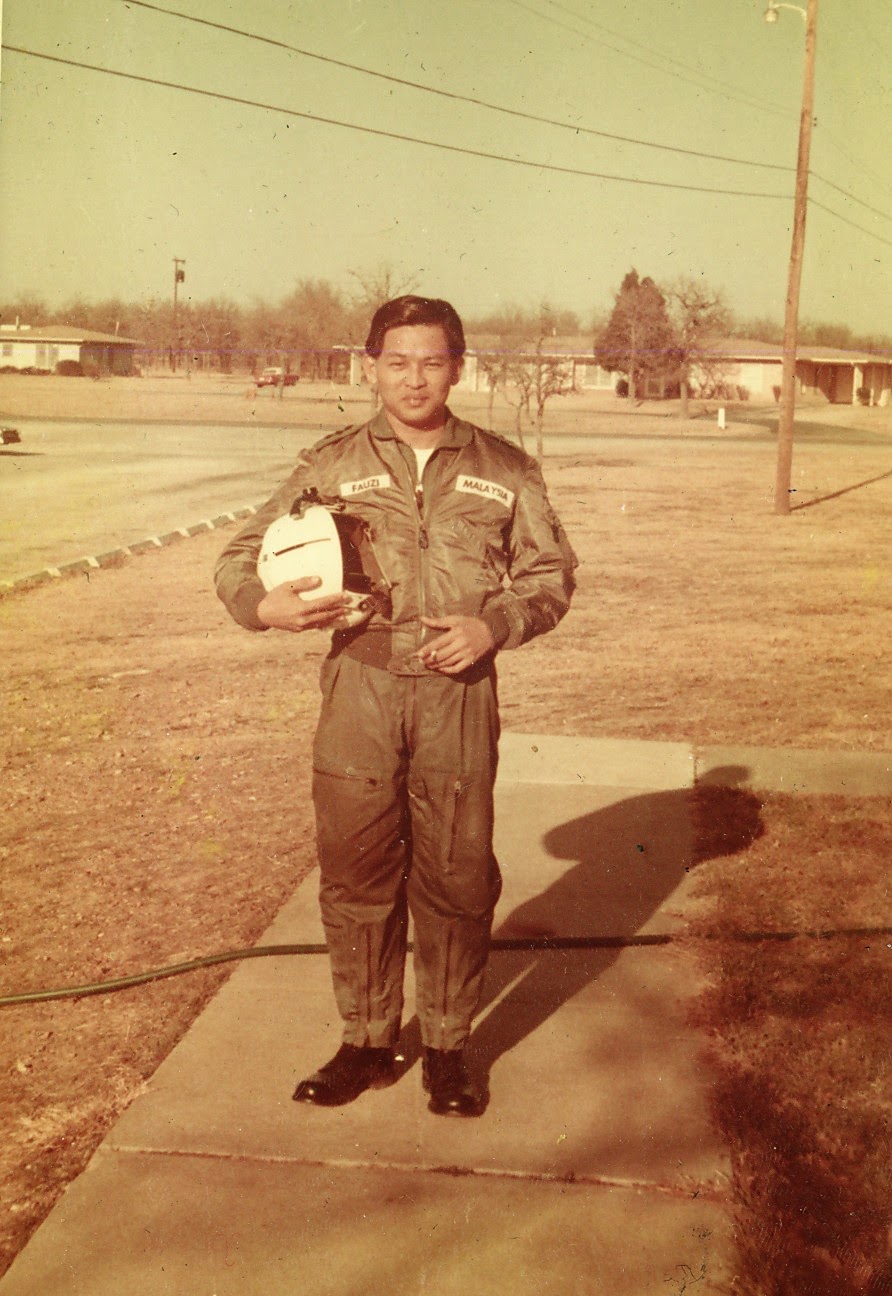 When I went for the helicopters training I was already a Captain with 4 years seniority in the rank, I was only made a squadron leader on 21st Sept 1970; after been a captain for more than 7 years. I was forgotten by the army because I was serving with the air force and I was not planned for promotion by the air force because I was from the army. 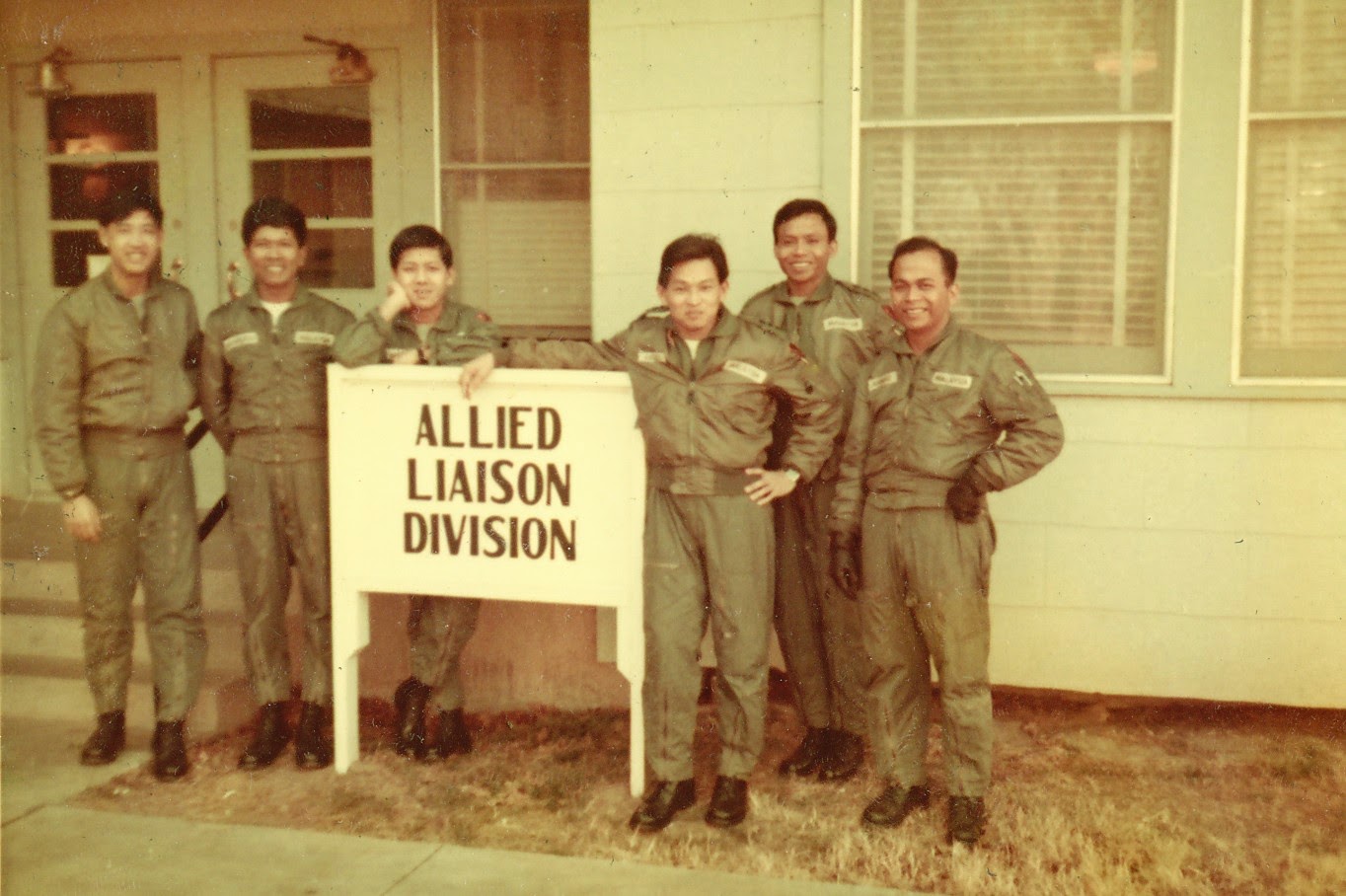 I was in the third batch to be sent for the training. Before me were Capt Mahmood Zain (died in a helicopter accident at Bintulu, Sarawak) and Capt Ahmad Azizah Zain, both from the Royal Malay Regiment. The 2nd batch consisted of RMAF officers, Flying Officer Steven Ngiau and Flying Officer Peter Wong. These two officers were already qualified pilots on fixed wing and were sent to be US to be converted to helicopter flying.

My batch consisted of Captain Hanafi Mahmood and me. 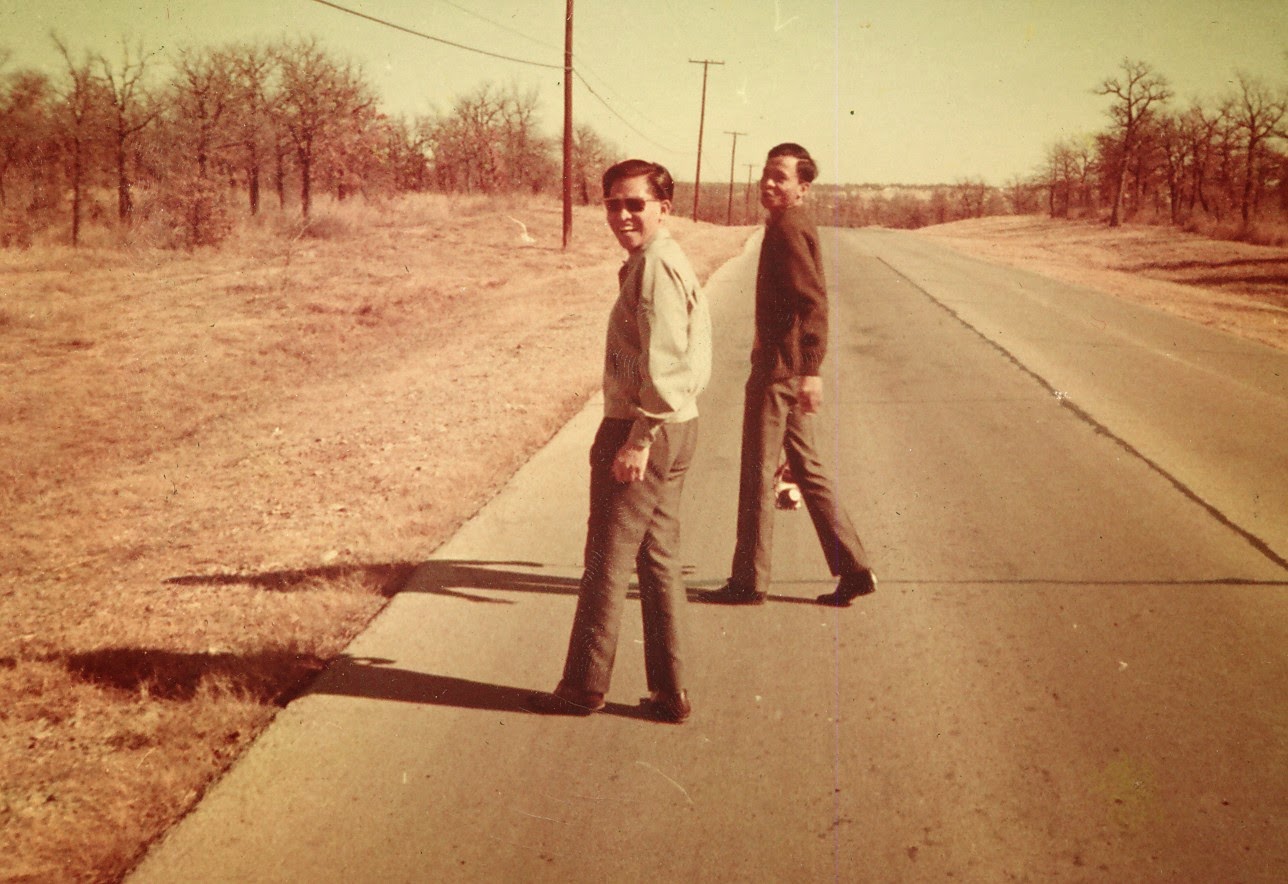 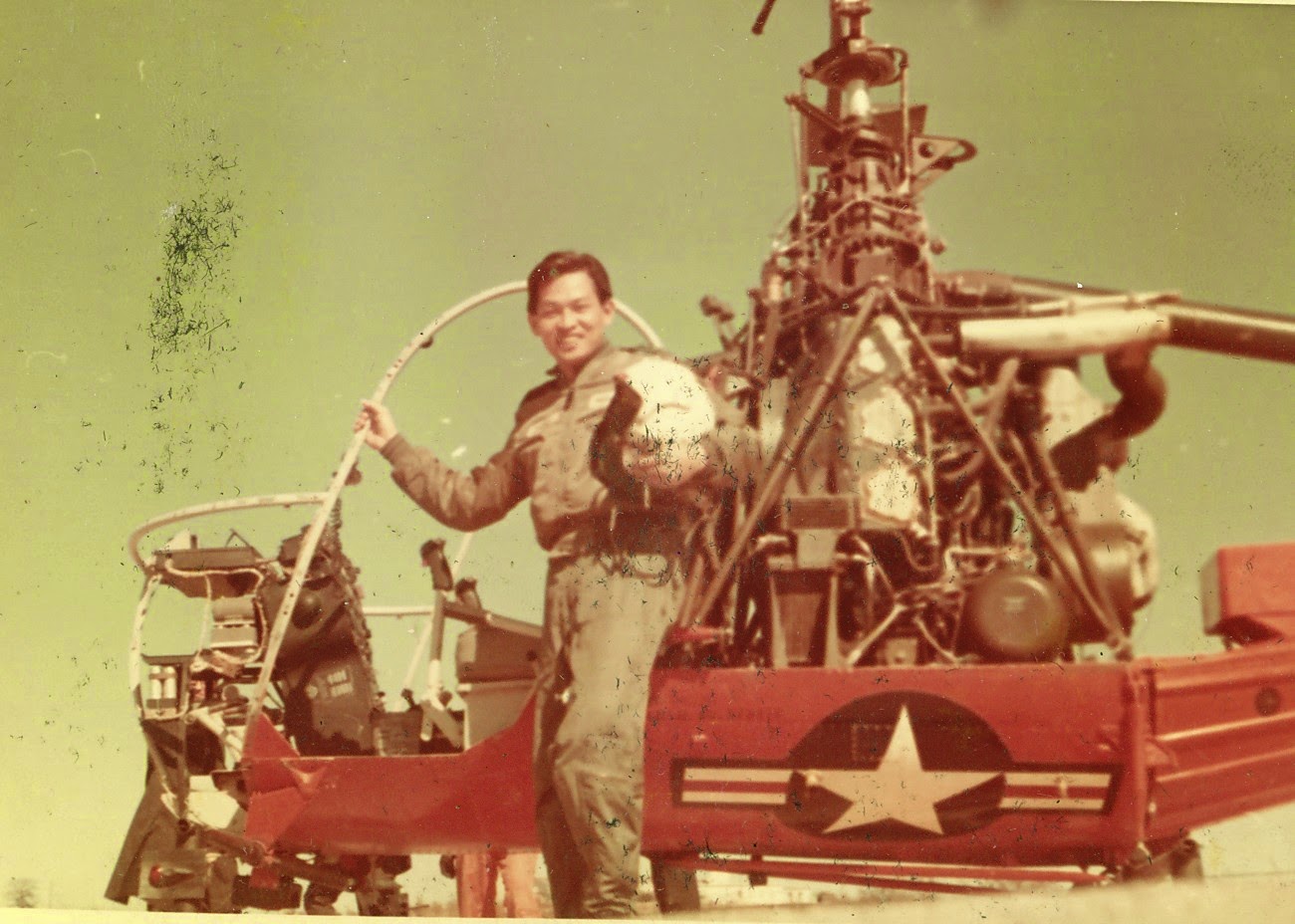 Flying discipline was strict during this time.  In the 1960s, the Vietnam War was at its height and a lot of casualties were suffered by the US ground troops especially the infantry (the grunts), the helicopters and their pilots.

Every month about 200 pilots passed out from this school to go to the advance tactical flying phase at Ft Rucker, Alabama.