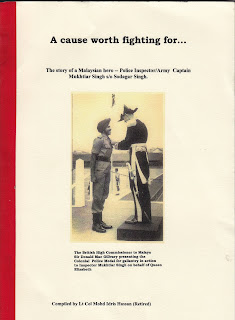 Readers...In December 2009, Lt Col Idris Mohd Idris Hassan (R) sent me this document entitled " A cause worth fighting for...". It was about the plight of an ex-Army captain who was deprived of his pension. Capt Mukhtiar Singh s/o Sodagar Singh was a Short Service Commission officer (SSC) who left the Military Police Corp  on 21 July 1978 at the age of 46 after being given a one-year extension of service. Inclusive of his service as Permanent Staff Instructor (PSI) in the Territorial Army (TA), he had served 16 years 11 months and 10 days. His application to become a 'Regular' officer was turned down on the ground that he did not attend the mandatory 'career courses'.

Prior to serving in the MAF, he was with the police force as a 'Temporary Inspector (TI)' for a period of 12 years. However, his tour with the police force was not recognised for pension purposes when he had to leave the Army. It was Lt Col Idris (R) who highlighted his plight in the mass media and later on picked up by bloggers. For days, this issue became 'hot' news in the 'Malay Mail'.

After a lot of hullaballoos, MINDEF officially responded that Capt Mokhtiar did not meet the requirements as stipulated in the 'Regulation 50 of the Regular Forces (Retired Pay, Pension, Gratuities and Other Grants) (Amendment) Regulation 1975'. He was only eligible for a terminal gratuity of RM8,332.50. Later, PDRM compensated him RM36,855 for his 12 years of service.

As a TI, he was a hero of sorts. He killed 5 communist terrorists in Kuala Kubu Baru during those Emergency days. But what a pity, his heroic deeds for the nation were deemed insignificant compared to those who glorify her as in the case of sports. Rules and Regulations are waived off and funds are made readily available out of thin air. We are not talking of RM3K monthly (Olympic 'silver' medallist), but a mere RM412.50 (assuming 50% of his last basic drawn pay RM825)!! It's really ironical...a special category of government servants whose services  were officially 'terminated', yet through the interference of 'platinum' cable, they were not only given full retirement benefits  but also  mind-blowing  ex-gratia compensations...the highest being RMx,ooo,ooo!!

Fortunately, he has friends who are ready to fight for him. With his kind permission, the latest update on this story is in Lt Col Idris's unedited e-mail below...

Last week on the 17th April 2010 I was invited to receive the award of Pingat Jasa Malaysia (PJM) together with fifty other recipients at the Royal Malay Regiment Club House.In-spite of my very bad back I hobbled on and went , not wanting to miss this auspicious occasion and a chance to meet my former commanders and old friends . There I was fortunate to meet Major Jen Dato' Zulkiflee Mazlan the present Director of the Armed Forces Veterans Association. I spoke to him of the 120 page binder ( A cause worth fighting for........A story of a Malaysian hero - Police Inspector Captain Mukthiar Singh s/o Sodagar Singh that was handed to him last year by Mukthiar with the request that he be considered for the gallantry award Panglima Gajah Berani. PGB. This award carries with it a monthly payment of RM. 1,500/ for life.

He thanked me for having taken the trouble to to compile this very comprehensive account of Mukthiar's service and his heroic exploits plus the additional information that I forwarded to him, adding that he has done the needful and the army is very favorably considering him for the award of PGB. I was assured that by next King's birthday hopefully there will be some good news. ( I served under the late Brig Gen Mazlan bin Yunus who was then my Brigade Commander 4 Bde in Temerloh in 1968. Zilkiflee his son was then a little boy )

I believe this will be some kind of record where a living soldier whose exploits as a jungle fighter some 50 years ago will finally be rewarded and rightly so .Mukhtiar had earlier been granted a gratuity payment of RM. 36.,855/which was also the result of his case being put forward by my team and me.
I have always believed that if you fight for some thing long enough and hard enough some thing is sure to give. It often pains me to think, how many of our servicemen with similar predicaments are in a limbo with no one to fight for them ?

Thankfully of late I have great colleague's like blogger ex Royal Ranger's Major Swami of Seventh Rangers (Mechanized) ex Royal Malay, Brig Gen ArshadRaji of CRUSADE AGAINST CORRUPTION and ex Royal Malaysian Air force Major Nor Ibrahim bin sulaiman of Jottings of an xnuripilot who have given ex servicemen a strong and fearless voice when ever the need arises .They are amomgst those who speak out when others don't even have the courage to listen.