From Teaching To Soldiering

I had a pleasant surprise when reading the column I REMEMBER WHEN in the NEW SUNDAY TIMES, 8 April 2012. It was about a former 'Peace Corps', Mr Rudy Ramp, who flew from Uncle Sam to Kampung Chenor, Pahang, in1962. There, he taught at Sekolah Lanjutan Kampung Chenor. He was reminiscing his adventures as a 'Bricklaying' teacher and also his housemates, namely Cikgu Mohd Idris Hassan and Cikgu Zainal Abidin.

You see, the name Mohd Idris Hassan sounded so familiar. And when this 'mat saleh' mentioned that he was of Pakistani descent and that his father had owned a taxi firm in Raub, automatically I remembered him....it must be Lt Col Mohd Idris Hassan (R). He often gives comments in my blog but under a pseudonym, and also sends e-mails regularly. Personally, I never knew him and had never met him before. 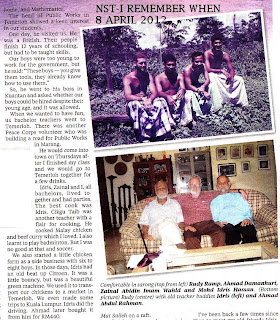 The way Cikgu Rudy related his story...He surely has fond memories of the close relationship with his long-lost friends! To me, it's an honour if a 'long-time-no-see' friend can recall  those memorable days.

You can read Lt Col Idris's 'partly' successful struggle to 'convince' the government to give 'The Tiger of Batang Kali', Capt Mukthiar Singh, his pension here. 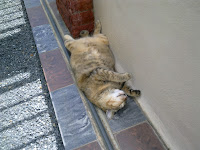 Cikgu Lt Col Idris....Now on a separate issue. Thank you for your comments about cats. Yes...They're part of my family. Yes...Only those who care for their pets share the same sentiment. One peculiar character about cats that I notice is that they would 'meow' only to those who care for them...They know those who don't like them. This is an Allah-given instinct to them. To those who don't fancy these lovable creatures...Please don't harm or ill-treat them. They're also Allah-created and deserve to live in this world too. It really hurts me when I see people kick these animals. Cats lovers can read my Mrs dedication to cats here. (Picture of the sleeping Montel).

Breaking News: 12/3/2012 jam 9:48 PM....I received this article and photograph through an e-mail from Saudara Mangchik Mangchuk. 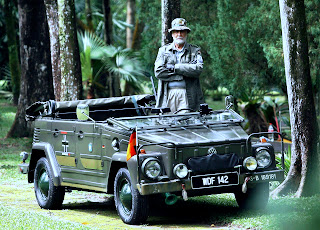