1st February 1984...Labuan Island became a Federal Territory/Wilayah Persekutuan! Where was I on that particular day? Of course I'll never forget that date...!

Flashback...As I've been saying in my ealier postings, I was OC No 5 Squadron, RMAF Labuan, from January 1982 till December 1984. For readers not from the Services, every unit in the MAF has an organisation called BAKAT -  Wives Association. Chairperson of BAKAT is the wife of the Commanding Officer (CO), of course.  In the event he is a 'weekend husband', ie, his wife is not with him, then the wife of next senior officer will be appointed by the CO to be the Chairperson. Well...My CO was a widower then and the next senior officer was the OC Flying Wing. His wife was appointed the Chairperson. After some time at the job, due to reasons not privy to others, she resigned. At this juncture, the CO appointed my wife to take over her place. I disagreed with this appointment on the grounds that first of all, my wife was a career woman, and secondly, the next senior officer was the SEngO (Senior Engineering Officer). However, by convention then, the normal practice was that it had to be the wife of a flier...correct me if I'm wrong.

But the CO was adamant and insisted that my wife took over the appointment. I only agreed when he agreed to my terms that the Base must secure her release from the school when her presence was required during working days and I must accompany her whenever she had to attend meetings away from the Base. The reasons were simple...First of all, her primary obligation was to the school, not to the Air Force...it was the school that appraised her performance! Fortunately, the school was accommodating and released her unconditionally. Secondly, as far as I remember, there was no budget/allocation/fund for travelling expenses; she was not entitled to any claim. Mind you, she had to represent RMAF Labuan and had to fly to Kuala Lumpur whenever there was a requirement by Central BAKAT. For this, she had to make her own arrangements for accommodation and transportation. The normal practice then was to 'squat' at friend's house...much to my dislike! If she wanted to stay in a hotel and use a taxi...well...it was the poor husband who had to bear all the costs. Where got road man...!

BAKAT activities were quite hectic, especially during visits when the visitors brought along their wives...and quite frequent at that! You had these annual visits by the Regional Commander, Air Commander, Air Force Chief and other VVIPs. 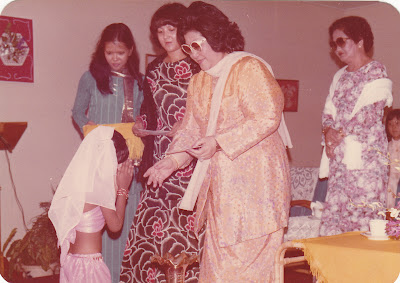 Visit by Almarhumah HRH Raja Perempuan Selangor to BAKAT in conjunction with the official visit of Almarhum HRH Sultan of Selangor to RMAF Labuan
So, some time in late January 1984, I accompanied my wife to KL to attend a BAKAT meeting. There was no Hercules C130 scheduled flight back to Labuan on that day...1 February. By the way, those days C130 was the sunshine airways for troops/family movement between Peninsular and Sarawak/Sabah. On checking with KL Base Ops Room, I was told that there was F28 VVIP flight to Labuan. I need to get the permission of the VVIP if I wanted to hitch a ride. He was in the VVIP room at the Air Movement. Well, I approached his ADC to request if I could jump aboard the aircraft. He relayed my request to the VVIP and ...no objection. So...my wife and I happily flew back to Labuan; there were 4 passengers only including both of us. And the VVIP was none other than the DPM then...Tun Musa Hitam.  He flew there to attend the ceremony on the declaration of Labuan as a Federal Territory.

On landing...all the who's who in Labuan were there to welcome DPM, including my CO. After Tun had disembarked...the CO could not believe his eyes on seeing this couple happily emerging from the F28...he...he...he. I could see the displeasure on his face...Trust this Major Nor Ibrahim...! Dato'...Jangan marah.
Dicatat oleh Mej. Dr. Nor Ibrahim bin Sulaiman PTU TUDM (B) di 5:41 PG

Sir,
There's 1 saying that is: " a wife is also married to the military". Now I know why. While a CO's wife have to take charge of BAKAT, RSM's wife is responsible to sew or repair the regimental colour.

Thank you for reading my blog. I'm shocked to learn that RSM's wife has to sew or repair the regimental colour...exceedingly humiliating indeed! I was once in the Army, attached to 7 RAMD, but we never once resorted to BAKAT to undertake such a job no matter how desperate we were!

,,,once i was asked, by my CO's wife why my wife has not attended any of the BAKAT gathering ?.
,,,my answer was she said, she is too bloody busy in ICU. (to see you !)
,,,wow the CO's wife jumped on me, saying that my wife is just too much and rude too !..until one fine day later she visited the General Hospital to see a very sick airman in the Intensive Care Unit, indeed, where my dear wife works very very hard to save lives !! hehehe.

BAKAT is not important but main wayang kulit is important.
Even your spouse was very much involved in BAKAT activities but you fail the wayang kulit, so sorry la mej, surely you know that!!!
So it is unforgettable BAKAT rather than the Hari Wilayah Labuan!!!
Takpe la mej... ALLAH maha mengetahui.
Main golf lagi best!!!!! Good luck to you.