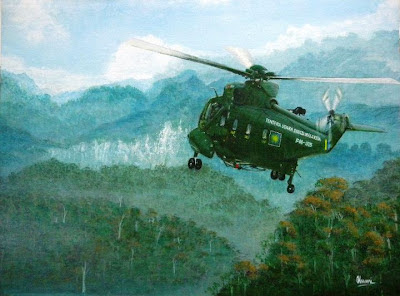 
.....killing all the 11  unsung and forgotten heroes on board the 'Iron Bird' after being shot down by the communist terrorists in the Gubir ops area...

Besides the above tragic incident, 2 Air Rescue Team members from RGK, were also killed in the Nuri by the enemies in 2 separate incidents while the 'egg-beater' was at the LPs during "Ops Selamat Sawadee". 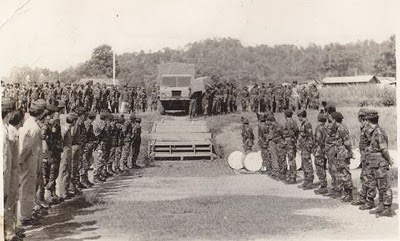 Last flight for arwah L/Cpl Md Sibki in the Nuri, killed on 31/10/1978, from Kroh (Pangkalan Hulu) to his birthplace

Early this month, I received a call from a lady reader of my book. She told me that she knew a wife of one of the heroes killed in the Nuri which went down in Gubir  when she followed her late policeman husband to Kelantan. The widow of the hero was from Kelantan but the hero wasn't a Kelantanese. According to the reader, the  latest she heard about the widow was that she had passed away alone in her house. Her death  was only discovered when one of her children failed to reach her through the phone. Suspecting that something was amiss, he/she alerted the neighbours. On checking, it was found that the mother had passed away 2 days before.

The reader wasn't able to furnish the details since she's no longer staying in Kelantan. I really hope those who know about this sad episode would elaborate further by emailing it to me.
AL-FATIHAH
Dicatat oleh Mej. Dr. Nor Ibrahim bin Sulaiman PTU TUDM (B) di 5:37 PG

I am touched by this entry. Such tragic incident...I am in awe of the losses of our soldiers... My heart bleeds for all of them.

In my eyes, they are all the true heroes! My heart and prayers are with each and every military person, living or deceased. We have peace and freedom because of these wonderful people! I cannot begin to describe my admiration for these soldiers. They are the noblest of souls. THANK YOU to each of them.

My deepest condolences to all the families and friends who have lost a loved one.


Let's never forget the soldiers that paid the ultimate price for the sovereignity of our country...


p/s....My deepest gratitude goes out for all the brave men who have given their lives so that I can continue to live in a peaceful country.

“Those who are killed in the cause of Allah - never will He waste their deeds” Surah Muhamad: 4.

I am here by chance and I like reminisces of old soldiers. I am particularly attractrd by this crash because one of my couusins was involved in a helicopter crash in Kelantan jungle in 1981 while on duty carrying out survey of our boundar with Thailand. I think it was a Nuri. Only one person died and he servives till today with certain handicap.