I find this article intereting... 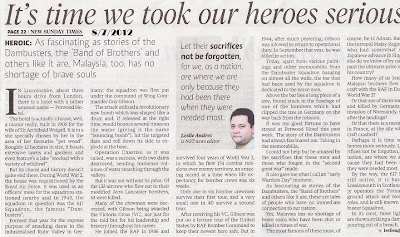 So, I sent this e-mail to the writer to express my view...


From: nor ibrahim sulaiman

I find your article in the 'VIEWPOINT'  on RAF's 'Dambusters'  617 Squadron interesting. And I truly agree that '..It's time we took our heroes seriously'. I really salute the British for their pride in their heritage and history. I may be wrong, but I feel our lackadaisical attitude in record keeping cost us Pulau Puteh to our neighbour!

We're not short of our own heroes too. There are books written on them, eg, Pahlawan Angkatan Tentera Malaysia - Penerima S.P dan P.G.B Jilid 1 & 2 and Pahlawan Tanahair - Penerima Pingat Keberanian British. These books were written by Lt Col Dr Syed Othman Syed Omar. Both of his eyes were blinded due to booby traps during an operation against communist terrorists in the Kedah area. I, too, had written a book, Coretan Xnuripilot, detailing my experiences as a Nuri pilot during those days. However, I'm not in the least surprised that these books are gathering dust in the bookshelf of public libraries. Nevertheless, we're fortunate that there were films made on such icons as the late Lt Dato' Adnan Saidi of WW2 episode and the heroes of 'Bukit Kepong' for the First Emergency. Soon, there'll be a film on WO1 Datuk Kanang Anak Langkau  which was announced by the Prime Minister recently.

Through my observations, the spirits of patriotism in our beloved country is highlighted only with the approaching  of Merdeka Day celebration every 31 August. To me, instilling this spirit should be an ongoing process, not seasonal as currently being practised. We are fortunate that many of these heroes are still alive to tell their experiences. They should be invited by the relevant government agencies, such PLKN, INTAN, BTN, IPTAs, etc, etc. These veterans were involved in the making of this country by fighting the enemies. In fact, I had written to certain agencies, including MAF itself, with this suggestion but, regrettably, to no avail. The only consolation was when National Archive invited me as a panel member for a forum on "Peristiwa Gubir" where a Nuri was shot down on 26 April 1976  by the enemies, killing all the 11 on board - click herehttp://xnuripilot.blogspot.com/2012/03/di-memorial-tar.html.

Well, something to ponder on. Thank you.