Gubir Camp...the most unforgettable name besides Kroh (now Pengkalan Hulu) and its 'Selamat Sawadee Ops'! One of the 'hottest' areas of operation against communist terrorists (CTs). It was the most hazardous operation theater for the Nuri. And, of course, for the ground troops as well. Many of our soldiers were killed and maimed for life in this area. The  CTs created history when they brought down one Nuri killing all the 11 crew and passengers on 26 April 1976.

In my first posting as a blogger entitled "Mengapa Saya Menentang Chin Peng Kembali Ke Malaysia", I related an experience when a convoy from the camp to the ops area was ambushed by the CTs near the camp itself. I was there and heard the shooting and saw a Land Rover full of bullet holes rushing to the camp. The 6th Bde IO was killed. We had breakfast at the Officers Mess at Sg Petani earlier. In fact, I personally assissted the AQM of the 2nd Nuri in pulling his stiff body into the chopper when he was winched up.

In one incident, my captain, the late Capt (U) Ismail Saud (my squad mate), did a low level flying over an open space when suddenly we heard an explosion and the Nuri wobbled violently. There was no damage to the 'iron bird' and we landed safely at Gubir. When my captain briefed the Army, we were told that there were no ground troops in that area and the possibility was that the Nuri's downwash might have triggered the booby traps there.

Air HQ directed that Nuri must be escorted at least by one by Alouette gunship when operating in Gubir area. The gunship would straff the area before landing. 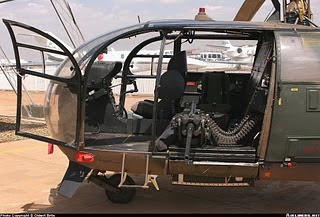 Similar Alouette 111 Gunship used by the RMAF fitted with MG151 20mm 'cannon'
I extracted Capt Longhouse's unedited comments in my posting entitled "Tragedi 26 April 1976...Episod 1" about the gunship escort...",,,AND Capt Kalid Ali  with his gunship escort plus blowing a round of 20 mm cannon shell in the Alouette 111, since the gun barrel was red hot from firing at the CTs while I come in for my final approaches. Plus the unmanned LPs that were booby trapped by the cunning CTs, which he burnt off with more than the required rounds hehehe !. His unexploded 20 mm rounds at the LPs were at times an extra hazard to both our Nuri and deploying troops ! hahaha.
,,,the CTs learnt not to mess around with our Nuri and Alouette gunship excorts with Capt. Kalid on the control too."
I was told recently by an ex-SB officer that the CTs were not worried by the 500 'pounder' bombs dropped by F5E or 'Tebuan' then nor the artillery guns. But they were dead worried of being straffed by gunships with 20mm HE...simply because it was more accurate.

Well...I was once escorted by 2 gunships when operating at Gubir. The callsigns of the gunships were 'Scorpian 1', piloted by the late Capt (U) Ripin, and 'Scorpian 2'. Scorpion 2 was piloted by a 'rookie' and this was his first gunship sortie. As directed, the gunships straffed the area surrounding the LPs before I landed there. After a few sorties, Scorpion 2 called on the 'chit-chat' UHF frequency, 2345, telling me that the gunner had accidentally dropped the cannon's barrel. You see, after shooting 200-300 rounds of HE, the barrel became literally 'red' hot and had to be replaced with a spare barrel. While in the process of replacing it, the barrel  dropped into the thick jungle. I'm sure the CTs were thinking that the gunner had to resort to 'hitting' them by throwing the barrel at them after exhausting the ammo...He...He...He...

Dedicated to all the  Alouette 111 Gunship aircrew...thank you for your fire power support during those 'adventurous' flying days. To the rookie gunship pilot, belovedly known as  'The Plane' after the famous tv series then "Fantasy Island", what an introduction to an escort sortie...!!

Please forgive me. I find it difficult to understand what you're trying to convey. I hope you can be a bit more 'layman' in your IT language. Thank you.

,,,this guy has shared and linked your write-up with Twitter presently-lah...Yeop Oii !!

,,,the pull out of all the villages from kpg Temenggoh by our Nuri should be disclosed too if we can get more details from aircrew involved ?.
,,,i have yet to rediscover my log book so till then i have only my old memories to depend on right now.
,,,remembered another incident, whereby the CTs wanted to blow-up the Temenggoh Dam itself but we managed to capture them and I flew back their captured weapons and explosives after the gun fight with our security forces.
,,,also the case where-by the CTs blew up more than 70 odd heavy machinaries along the East/Weat highway while it was under construction.
,,,the supply runs and heavy lifts we had to perform along the high mountains tops and later the Nuri that crashed piloted by Capt. Ayam Sejuk !.(a few years later when i had left the Airforce but i remembered telling this co-pilot guy at the slow rate of learning and his 1 2 1 attitude in the cockpit that one fine day, he will end up crashing the chopper such he was not recommended during my time to be aircraft captain !)In fact, we nearly crashed in one heavy lift sortie when he over controlled the joy stick during the final approach to the drop off LP. He unfortunately killed off the speed too bloody early and we were at 4700 ft with almost zero speed and 300 ft to run in, running out of left padel and yawing right out of control !. Had we not jettisoning the underslung load, we would be history too. Pls don't ask me what we were carrying under the belly !. Being an OCU Nuri Instructor was indeed very challenging then too. The new pilots were trying to kill me more times than the CTs during our actual training flights in the air plus having to help out the ops. sqn. since we were very short of aircrew then too.
,,,the Nuri OCU move to RMAF Kluang was a good choise but I was still called out to fly VVIP and the odd special ops.support flights when there was an urgent requirement.

I was in Bangladesh when the nuri crashed at Batu Melintang ops area. As for the evacuation of the people of Banding, I can't write much since I was not involved in it. I hope our friends out there are willing to share their experiences.