Once again...the annual Piala Keputeraan. This year it was held on 4, 5 & 6 March 2010 over 18 holes. I chose to play on 6 Mar for a simple reason, it was a Saturday. You see...where possible I'll try not to miss my 4-day weekly game with my gang at DGCC. After all, I play at RKC on Saturdays and Sundays only.

6 March 2010...Here I come...all prepared to be one of the winners. If not one of the main winners, then,  the winner of the Senior Golfer category...or at least a winner of 'C' medal. My mind was all set for the game.

My flight's scheduled tee-off time was 0835 hours. But we finally tee-off at 0905 hours...2nd last flight. The temperature for the first 9 was quite bearable but for the second 9, it was unbearably hot...it was about 37*C-40* C. We finished the game at 1405 hours. Because of the heat that spoilt my game...it was simply unbelievable that my gross was 105 and net 84. So unlike me...He...he...he. As an afterthought, I should not complain at all since my 82-year friend, Mong Khon,  pulled his trolley throughout the 18 holes. He was in the last flight and did not use the service of the 'trolley puller'.

My flight mates were... 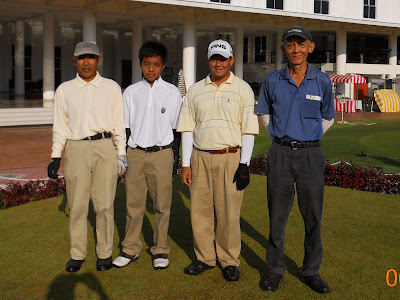 L to R: Nor Ibrahim, Ilham Widad, Junaidi, Cikgu Goon Keen Chee
Ilham Widah is a Form 2 student while Cikgu Goon is an active member of the 'Evergreen'.  I'm very sure none of my flight members was in the winners' list since our scores were just so...so...lah!
The prize giving and dinner was held the same night and all golfers and spouses were invited to attend. HH Sultan of Kedah gave away the prizes... 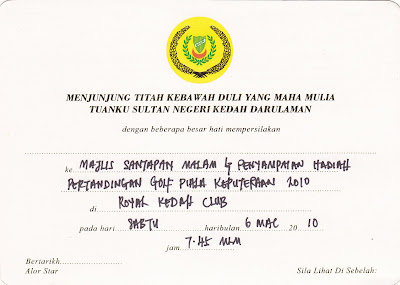 Just sharpen your short game then, one day you will be the winner...ha haha..keep trying mej.

Thank you for your inspiration. Not that I can't play...the weather was too hot...he...he...he.

Good for you Squad. Keep on playing. My golf, the game that I love most, seems to have ran aground after a mishap on an Express Boat in Sibu about 3 years ago. My left shoulder has not recovered fully.

Thank you. I'm no longer bothered about the quality of the game. Syukur if I can continue playing.