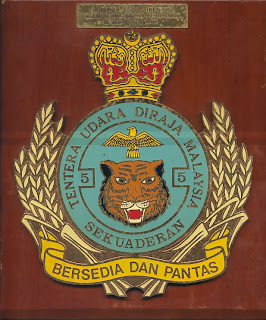 From 1st January 1982 through 31st December 1984 I was posted as OC No 5 Sqn, RMAF Labuan upon completion of 1-year course at Defence Services Command and Staff College (DSCSC), Mirpur Cantonment, Dacca, Bangladesh.

I was a pioneer of sorts - the first RMAF officer attending the course there and the only foreigner amongst 8 students in the Air Wing of DSCSC. The other Malaysian was Major Pakwan Chik Hashim of Malaysian Ranger in the Army Wing. I went there alone and he brought his family along.

For information, it was during this period when the late President Zia Ur Rahman was assassinated and I met the alleged conspirator, Maj Gen Manzur, I think, when the students visited his Division at Chittagong. Hari ini dalam sejarah..... Now back to Labuan. Well, it was a real shock for me! The flying duties here were so very contrasting to what I was used to. No gunship to straff the area before making the landing, LPs as big as football fields, no wearing of those heavy and smelly fragmentation vest, no weekly detachment and best of all...no CTs taking pot shots at you. Basically, the flights here involved 'communication' flights between towns, eg, from Labuan to Kota Kinabalu, Tawau, Sandakan. The only troop lift and/or resupply sorties that I could remember were to Terumbu Layang-Layang (TLL), also known as Station 5, and to Pulau Banggi.

It was cushy flying for these aircrew but for me, they missed the adventures I had gone through.....! My main concerns when operating here were the flight of 1 hour 30 minutes to TLL and the unpredictable weather. A write-up on the flight to TLL to follow later.

As for the weather, I never experienced this natural phenomena while operating in Peninsular Malaysia. From a clear sky, you suddenly see heavy rain and thick clouds especially when flying in the interior. I had experienced it myself. I took off from Labuan at about 1500hr to one location in the interior, Long Pasia, I think, to recover an unserviceable nuri there. The weather was perfect at Labuan and the mainland. However, when I wanted to cross the mountains, suddenly I was caught in the heavy rain and thick cloud. Visiblity was almost zero. The only way to escape from this situation was to execute a spiral climb to about 7000 feet - well cleared of the highest peaks there. Then I requested radar pick-up from Brunei Controller to vector me to Labuan. After about 10 minutes in the IMC condition....what a lovely sight....Labuan island, very clear! The sortie was aborted and the recovery was done the next day. Sometimes, at Labuan Base itself, half of the runway was under heavy rain whilst the other half bright and sunny!

Details of my last flight as a nuri captain: 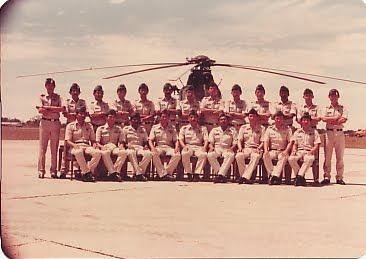 For the services rendered during my tour of duty in Labuan, I was bestowed 2 Sabah state awards - ADK (Ahli Darjah Kinabalu) and BSK (Bintang Setia Kinabalu). And the best of all...the state sponsored my wife and I to perform the Haj in 1983! Syukur Alhamdulillah, what a rezeki .....

In memory of those who had once served under me in 5 Sqn....hanya tinggal dalam kenangan.... 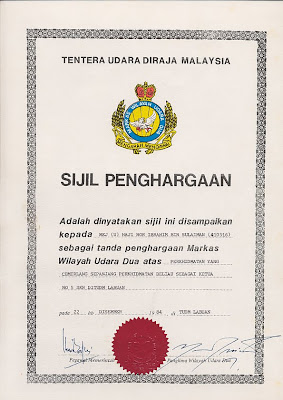 Very interesting to read your stories. You had a colourful career with the RMAF.

Congratulations on the publishment of your story as nuri pilot in this blog. Can you, if possible to indicate to me in the picture, which one is the late lt.Merejok and lt.James Tinggom? I believe both of them are Sarawakian.

Thank you for reading my blog.

If i am not mistaken , Merejok anak nuing died in an air crash? Whatever happen to his family? Any ideas where James tinggom is? Fond memories with these two hahahaha...

Thank you for reading my blog. 5 pilots who had once served under me when I was OC No 5 Sqn had passed away. Lt James Tinggom was one of them.

Pleasure's all mine sir. Was Lt Ruslan also from Semenanjung or is he from Sarawak? Hope u don't mind, trying to recall a few friends..;-). WIth yr vast expereince u should write a book. Wonder if u know this chap who is currently a serving member in the RMAF also a chopper pilot, Major Jefrey Matisa? Syiok gak baca his ups n downs...

Salam Mej Ibrahim (Bersara), Saya Lt Kol Ishak Ujang TUDM, tpt pilot. Intake TJT-26 RMC (1985-87)I served Labuan fm Dec 89-95 with No 8 Sqn and later became No 1 Sqn.That time Co 5 Sqn was Mej Ismail "Cikgu" than Mej Rosli Yusof now Kol at MTAT. Mej Jefry Matisa was my senior when we were at RMC Cadet Wing. He is currently Nuri pilot at No 5 Sqn, your former Sqn. If you req any assistance please call me 012-2479301 or my email add ishak00@yahoo.com