I'm sure all of you know, or at least heard of nuri helicopter before. Well, it's big....how big? It can carry 30 passengers plus 3 crew, ie, the captain, co-pilot and the air quartermaster (AQM). Can visualise now? 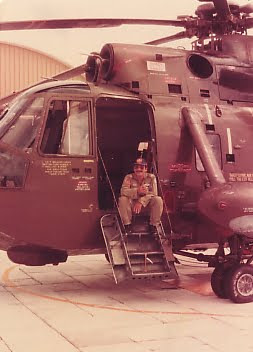 The nuri was a real 'shooting duck' for CTs target practices. It's big, bulky and sloppy, unlike it's younger brother the Allouette 3, the 'mini cooper'. We were fortunate that the CTs were not Olympics-standard shooters, otherwise we were goners... Anyway, I'm very proud to fly nuri throughout my flying career.
Now back to Selamat Sawadee Ops......nuri detachment at Kroh (former name of Pengkalan Hulu).

After breakfast, the Intelligence Officer (IO) would brief us on the situation, including the radio frequency of the ground troops (GTs). Like most aircraft, nuri was then equipped with analogue HF, VHF and UHF radios. The GTs used HF radio. We would switch to GTs frequency whenever the need arose. The problem with HF was that it was too noisy.

Then, just wait..... Changeover of troops and resupply were preplanned. Casevacs at the disposal of the CTs - beyond the control of the GTs.

Geography lesson now. On the Malaysian side of the border near Kroh, the environmentalists should be happy to know that the mountains/hills/highlands were still covered with virgin jungle. Whereas on the Thai side, the terrains were almost clear of vegetation - no jungle at all! I didn't believe it myself. I suppose they cleared the jungle to plant rubber trees.

I was tasked to pick up a medivac - I think - on the Thai side. Just a routine sortie. Although the area was big enough, there was no space for nuri to land due to tree stumps. No choice but to hover for winching. While approaching to hover, my co-pilot switched to GTs' radio frequency and 'on' my HF radio. 'Alpha Charlie, Alpha Charlie...take off, take off' (AC meant aircraft). It was the GTs radio operator shouting for me to fly off. My immediate reaction was to execute an overshoot and climb for Kroh. Later, we were told that the GTs saw the CTs running to take position before taking pot shots at my nuri. I had to thank my co-pilot for switching to GTs frequency.

Then there was this task to resupply the RGK unit (commandos) on the Thai side. The tasking sheet stated to offload at marker, say 'T'. No big deal. When I reached the location there was no LP at all. Marker 'T', yes. LP? No. The 'T' was on steep slope. I contacted the officer, a captain I think, telling that I would have to hover and threw the rations. His response was if I did that, the rations would be destroyed and no food for them since they had run out of rations. Pity those guys.....Well, I landed with the starboard (right) landing gear on the slope whilst the port (left) landing gear and tail wheel hanging. I was praying to Almighty Allah hoping that the CTs were enjoying their R & R at Betong. Syukur Alhamdulillah, the sortie was completed successfully. 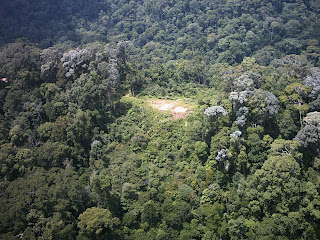 I could appreciate their problems - how could they construct an ideal LP as in the picture while on 'hot pursuit' mission?

I'm very proud to say that my colleagues and I were not rigidly rules-abiding pilots. We flew within our own and aircraft limitations. If we were to adhere strictly to the standard LP as stipulated in the official publication, the success of the ops might be hampered.
Dicatat oleh Mej. Dr. Nor Ibrahim bin Sulaiman PTU TUDM (B) di 1:32 PTG

I salute / tabik spring you squad. You are very courageous and an understanding pilot and knew the problem faced by the GTs.

We always appreciate that kind of pilot and even talked about them in our messes.

Thank you. You remember the IO 6th Bde in my 1st blog? He was the late Capt Hardev Singh. I remember him very well because I personally had to pull his body into the aircraft.