Datukship For WO 1 Kanang anak Langkau

Last year, I think, I read an article written by a blogger, one Lt Col Wong (R), recommending that WO 1 Kanang anak Langkau (R) should be made a 'Datuk'. 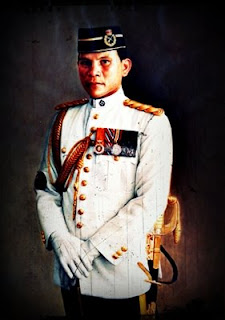 I totally concur with his suggestion. If we have actors, comedians, singers, conmen,  exconvicts, and others who are datuks, I don't see any reason why our national warriors like him are not conferred such an award! Say what you like, he is the only one among the 27 million Malaysians who was awarded with the highest award, Seri Pahlawan Gagah Perkasa (SP) and also Pingat Gagah Berani (PGB). Don't you think that he deserves a Datukship? If I'm not mistaken, protocol-wise, even recipients of 'Tun' come second to SP!

Last night, while browsing through the postings on WO 1 Kanang, I came across this report by skorcareer.com....

"Kanang anak Langkau, one of the national heroes during the communist insurgence in the 70s, has humbly declined offers to make him a Datuk.

In a statement to press, he told that he can’t afford the Datukship title as he is not rich enough to dress and act like one." You can read the full write-up here.

His reasons for declining the award really touched me. '...he is not rich enough to dress and act like one' reminded me of a comment by a reader in this blog when he said that WO 1 Kanang tried to sell his medals due to financial constraints but there were no buyers. I presume what he meant was that the cost of making the official 'uniform' for the ceremony was too exorbitant for him. With a meagre pension of a WO 1 then, the money could be better used to sustain livelihood. Fortunately, with effect from 1 July 2009, he gets an extra RM 3500 monthly, ie, RM2000 for SP and RM1500 for PGB, over and above his pension.

Readers...I do not know how much his pension was when he first retired; it couldn't be more than RM1000. My assumption is based on my own pension of RM1292 then which was half of my last drawn basic pay of RM2584 (maximum pay for a Major then) when I retired from the Armed Forces in 1992 after 25 years of service. He was a WO 1 only. I'm sure you can imagine his monthly pension!

Oh...What a misconception of a 'Datuk'! I'm sure the state that had offered him this award is fully aware of his financial standing and do not expect him to 'contribute' to 'Datuks' Association'. In fact, I'm sure there are sponsors who are willing to pick-up the bills for the expenses incurred in making the ceremonial dresses if this was the main reason.  Encik, we're xservicemen, so...we act like xservicemen...walking with our heads held high! We're are what we are. If a 'Datuk' is perceived as a 'successful' person, then you are a 'successful' soldier. Is 'Datuk' synonymous with a  person living a lifestyle beyond that of an ordinary  rakyat, wearing designers' clothing and act like a 'gentleman' (whatever the definition)? Of course not...otherwise there are no Datuks who are imprisoned or who fled the country when their 'gentlemenly' acts are being exposed. Or finding Datuks  'window shopping' at 'bundle' stalls for golf shoes...He...he...he.

Well, I sincerely hope the state that had once offered him the Datukship, would reconsider giving him this award. As for Encik Kanang, let it be known to you that the nation is indebted to you for your contributions in defending this beloved country of ours. If there is an offer for this award again, why not reconsider it.

MINDEF...What say you? Don't you think that one of your heroes deserve to be conferred a Datukship albeit being just a Warrant Officer? I would also like to suggest that holders of 'Bravery Awards', especially the Other Ranks, be given a 'first class' ward whenever they are admitted to government hospitals. Imagine a scenario when an SP holder, say a Private, is admitted in the hospital. By virtue of his rank and pay, he is only entitled to an 'ordinary' class  as compared to the benefits of a 'Sasterawan Negara' which include a 'first' class ward in a government hospital. What a humiliation to a national hero....!
Dicatat oleh Mej. Dr. Nor Ibrahim bin Sulaiman PTU TUDM (B) di 6:17 PG

I completely agree with you. Our only SP & PGB holder must be always respected for his contributions to the country and rewarded accordingly.

It was an honor to have WO Kanang as a passenger on one of my Caribou Schedule flights from Kuching to Labuan during the eighties.

For me, nowadays Datukship carry no meaning as all Dick, Tom & Harry could receive it vide paying some amount of monies/contribution or active in ruling political parties. Even if you did a film shooting in Malaysia would give you this title.

I am pretty sure there are people out there who are willing to take up the bill of preparing the necessary dress-code required for Mr. Kanang towards receiving the award.

Could someone please advise Mr. Kanang not to worry on acting like Datuk because after the ceremony, they will forget him again as what they've done despite having noted that he was awarded the highest medal of honour.

This shows that the current mentality of Malaysian are more towards monies regardless you are a true hero who have fought with life just to ensure we are living as what we are now. In a simple word "Depa buta sejarah". Couple with more entertainment slots in those TVs, namely reality programmes, the young generation is not only "buta sejarah" but "buta perut".

I know that when you throw a pebble at London, it's surely hit a Datuk! But then in the case of WO1 Kanang, we're assured that he's a genuine Datuk.

I'm all out to support you on this. I've posted your link to every possible eMails of friends and social groups that I've come across so far, so keep it coming Tuan.
Thank You again Tuan for being there for us then and now for speaking on behalf of us.

Thank you. I'm just expressing my views. How I wish those in authority read this short write-up and take appropriate positive actions.