Memoir Of A Gunship Gunner

Readers...This is an article written by an ex Gunship gunner of No 3 Squadron, RMAF Butterworth.


Title:  An episode of the first RMAF Nuri helicopter to be shot down.
By retired Flt Sgt Peter Floriano Nunis.
“WE ARE SHOT! ALL WARNING LIGHTS ON! was heard on the communication set in an army camp operations room at Gubir, Kedah, followed by an eerie silence sequential of the unexpected, as radio operators vainly attempted to re-establish radio contact with a Royal Malaysian Air Force (RMAF) Nuri helicopter.
The helicopter with 11 personnel on board was on a theatre of operation orientation flight following a crew changeover on April 26, 1976 when the incident occurred at about 9am – 9.30am.
All 11souls on board, five RMAF aircrew, three army officers and three commandos perished in the ill-fated flight.
Subsequently it was learnt from a surrendered communist terrorist (CT) that the opportunity target of the low flying helicopter was shot down by a grenade launcher (M79) rifle.
Following the incident six commandos winched down from another Nuri grimly collected the charred remains of the victims and placed them into “body bags” which were then winched up into a Nuri and flown to an army camp in Sungai Petani, Kedah.
The bodies were identified and taken to their respective hometowns where they were accorded full ceremonial military burials.
This sad narrative of what happened on that fateful day was a result of a combined air and ground follow-up assault on a major CT camp 34 years ago.
The well concealed camp, complete with a basketball court, accommodation quarters, dining area, underground shooting range and well fortified bunkers with interconnecting tunnels in mention, has since been turned into a tourist attraction after the Communist Party of Malaya (CPM) laid down arms in December 1989.
The turn of events of the CPM’s so called fight for freedom (we gained Merdeka in Aug 31, 1957) was mainly due to the frequent and numerous operations and hot pursuits by the army and police jungle-fighting units which depended on the valuable support of the RMAF’s Number Three, Five, Seven and 10 helicopter squardrons and their personnel.
RMAF as the country’s sole operator of the Nuri and Alouette helicopters not only operated from their bases in Butterworth, Kuantan, Kuching and Labuan but also from the many forward bases where our ground troops were deployed.
These men at most times had to bear with the less than conducive environment and brave the elements which when compared with the troops in the jungle was nothing to moan about.
Playing an all important role were the Nuri helicopters and their crew which were utilized for troop airlifts, ration supply runs, medical evacutions, search and rescue operations as well as flood relief taskings.
On the other hand the Alouette despite being in service from 1963 which as the workhorse of the RMAF were depended upon for its multi-role since the late Tengku Abdul Rahman’s time.
Among the major roles played by this RMAF’s first rotary wing aircraft were gunship escort, voice broadcast, leaflet drop for curfew and CT surrender conditions, airbourne observation post (AOP) for artillery firing, forward airbourne command (FAC) for fighter and bomber aircraft air to ground strikes, air reconnaissance, airforce flying doctor service (AFDS), medevac/casevacs and search and rescue.
Topping all that was the night intercept operations with RMAF’s Number Three Air Defence Centre during their deployment at Kota Baru, Kelantan where the gunship crew with night vision aids were radar guided to track down a blip on the radar screen. The futile operation was called off after a few weeks when it was found that there was a fault in the radar equipment.
There were also times when these helicopters were sitting ducks while hovering over landing zones (LZs) or landing points (LPs) to either rescue the numerous booby-trap victims or recover just as many dead bodies to be flown back to base camps. Likewise there were just as many CT bodies transported out of contact areas in cargo nets underslung from the belly of helicopters.
The pain and sufferings of our gallant troops with serious injuries and missing limbs are etched in my mind where occasionally the helicopter on returning to base needed a good wash due to spilled blood.
Yes, those were trying times of a concerted effort of personnel from units of the Malay Regiments, Commandos, Artillery, Engineers, Rangers, Calvary, Signals, Medical, Police Field Force, Senoi Praaq, Special Branch, Air Despatch, Border Scouts (Sabah), Air Force and Navy was really the force that constituted to victory against the post-war insurgencies.
At times during heavy taskings there four to six helicopters of each type operating simultaneously at different locations in Perak, Kedah, Kelantan and Sarawak.
It is now 25 years since I retired from the Air Force and as I recall those youthful years I feel proud that I was among the many thousands who had a job to be done and we did it with commitment so that all may enjoy total freedom today.
Until my retirement in 1985 and from entries in my aircrew flying logbook it shows that from the close to 3,000 hours accumulated (on Alouette only) I had flown more than 300 operation details as an air gunner in Sarawak, Perak, Kedah, Pahang and Kelantan.
Among the operations I was involved in were Ops Seri Aman Sibu, Sarawak; Ops Indera Bentong, Pahang; Ops Gonzales Ipoh, Lasah and Sungai Siput, Perak; Ops Bulan (night intercept) Kelantan; Ops Doyai Musnah Padang Besar; Ops Selamat Sawadee Padang Besar and Kroh, Perak and Bertam, Kelantan; Ops Jala Emas Sungai Siput; Ops Caya Bina Kroh and Thailand and both Ops Ukor and Ops Kota Ekor along the Malaysian/Thai border.
Prior to this I had also served with the British Royal Air Force (M) from 1961-1966 at Seletar and Changi, Singapore as an aero-engine mechanic where I was detailed for guard duty along Changi beach as well as airfield and parked aircrafts during the Indonesian confrontation rears of 1963-65.
End. 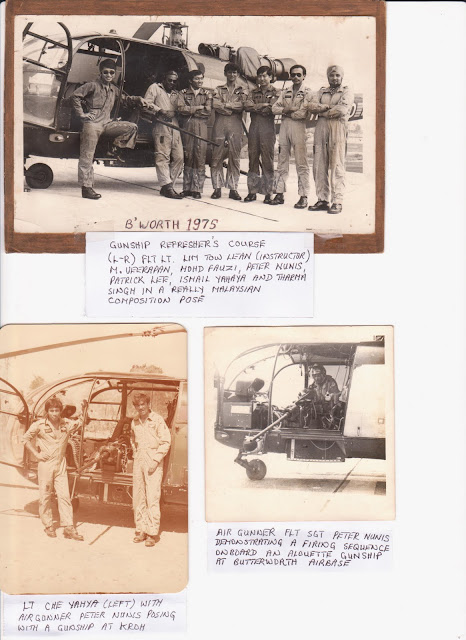 ,,,those were the days yaa !. Do drop in to pulau kapas, Capt. Uban's longhouse...for some beer, on me foc.

Peter...
Nice to hear from you... been so long and yet not forgetting when you smile after closing down the heli though tired but you still smile as in the photo.....
But those were the days and it is no more like before as the current RMAF leaderships are alien to those kind of operations so much so many become "out of sight..out of mind"
Good luck and good health!!!

Thanks for the memories. You seniors led and showed us the way.

Peter
Thanks for the memories.
With reference to the para you mentioned, 'Topping all that was the night intercept operations with RMAF’s Number Three Air Defence Centre during their deployment at Kota Baru, Kelantan where the gunship crew with night vision aids were radar guided to track down a blip on the radar screen. The futile operation was called off after a few weeks when it was found that there was a fault in the radar equipment.
I would like to highlight here that it was not caused by the radar equipment but was due to Anomalous Propagation (AP) can greatly extend, or reduce, the height and/or range of radar.

AP occurs in many forms. One type of refractive condition can extend the normal detection range of radar and, if conditions intensify, produce false echoes or ghosting. Ghosting can cause returning echoes to fool the radar equipment into displaying faraway echoes as though they are much closer than they actually are. This was the case, and a great deal of time and energy were expended reacting to false echoes.

With another type of refractive condition, AP may produce a shadow zone (commonly referred to as a radar hole), sometimes allowing an aircraft or ship to approach within visual range but to remain undetected by radar, as in our second example. In this case, the radar equipment operated properly. But one can only imagine the consternation caused within the strike group!

Another naturally occurring AP feature is known as a duct. Simply put, a duct is a region of the atmosphere that traps EM waves (prevents them from spreading out), and thus allows them and their energy to propagate over long ranges.

Hope this will clear the air.

Remember when we were having jokes at unappetite looking lunch at Kroh's mess. "Just closed your eyes and imagine fishes that turned out to be fried chickens".he! he! he!