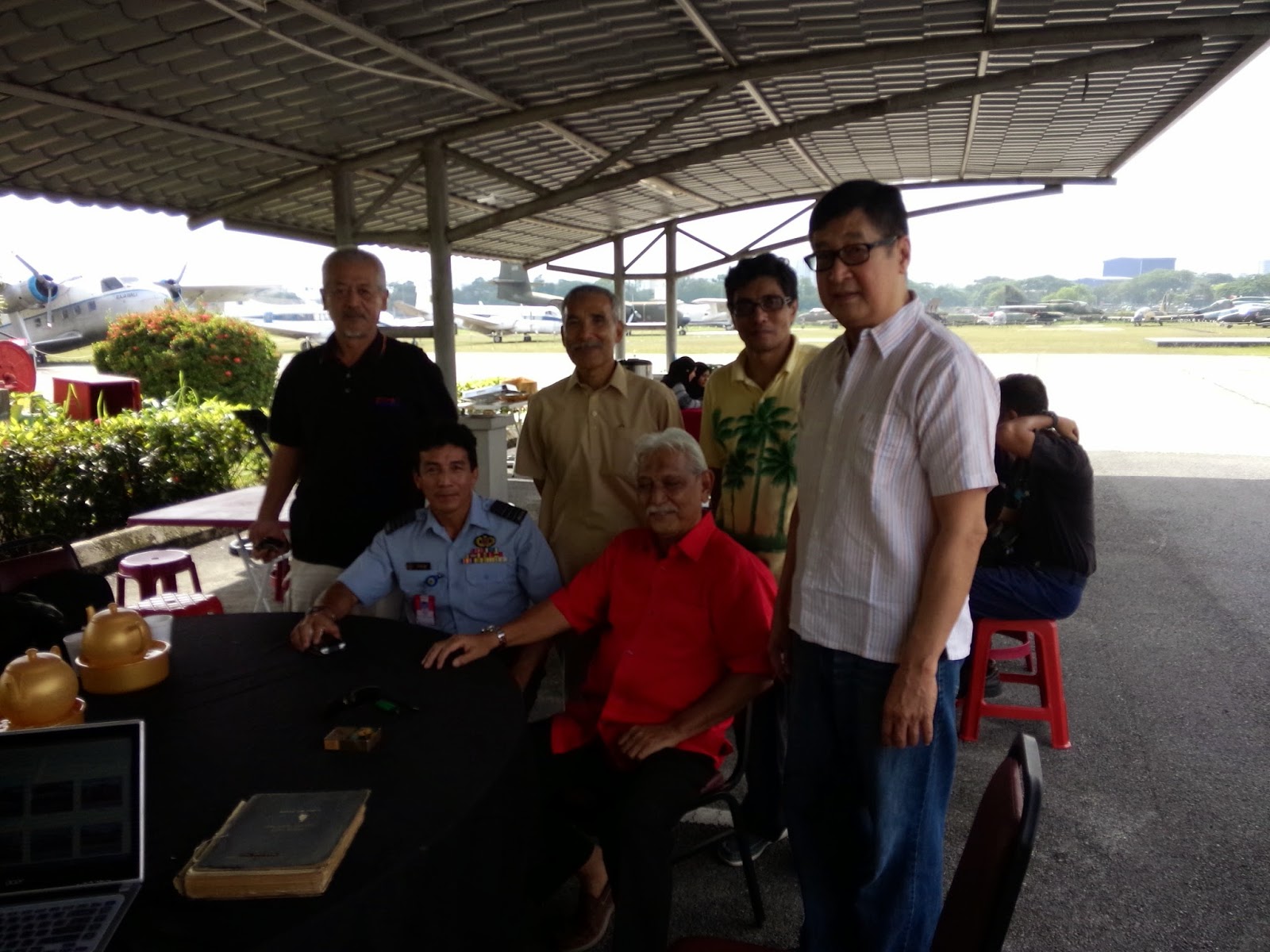 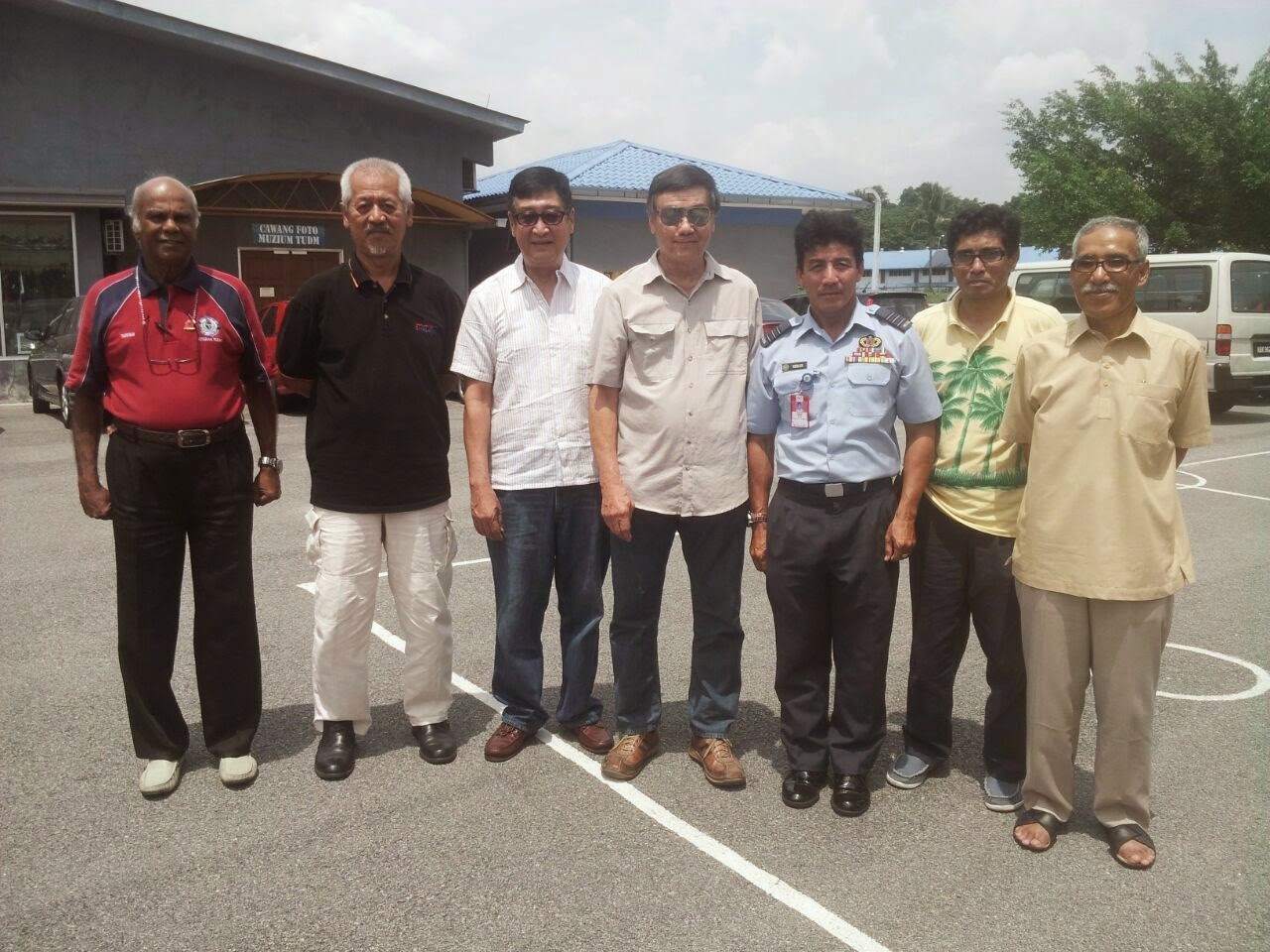 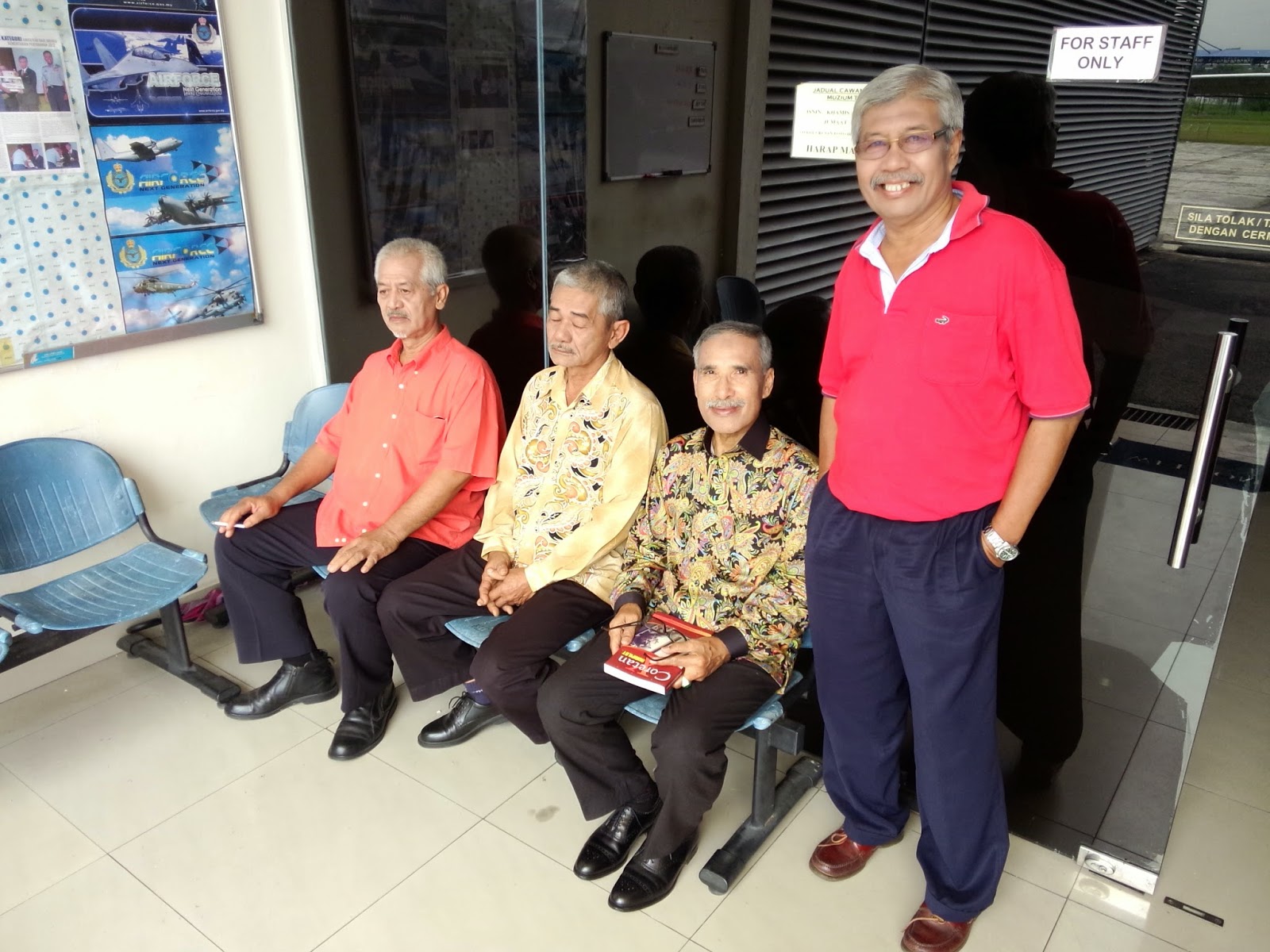 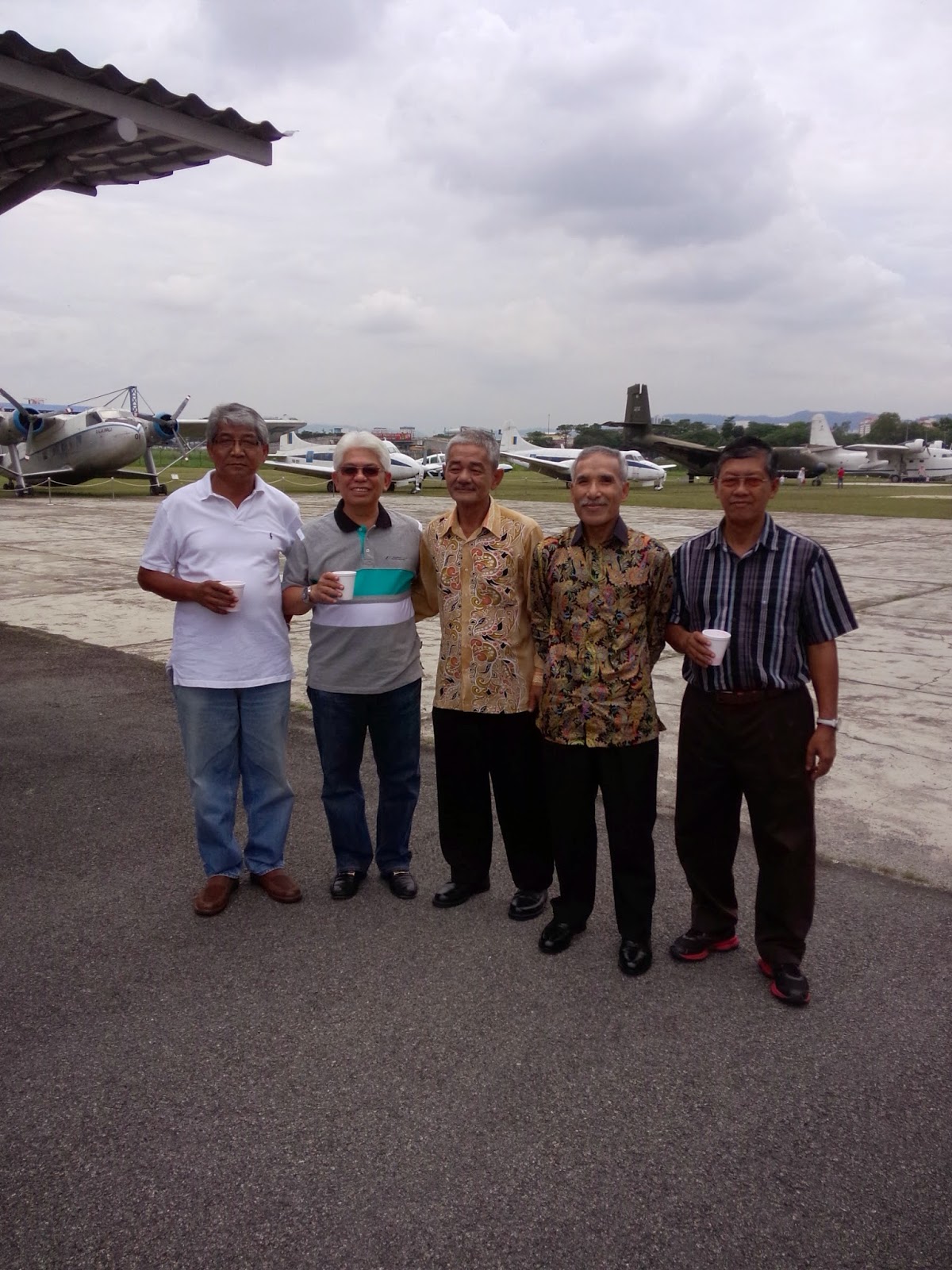 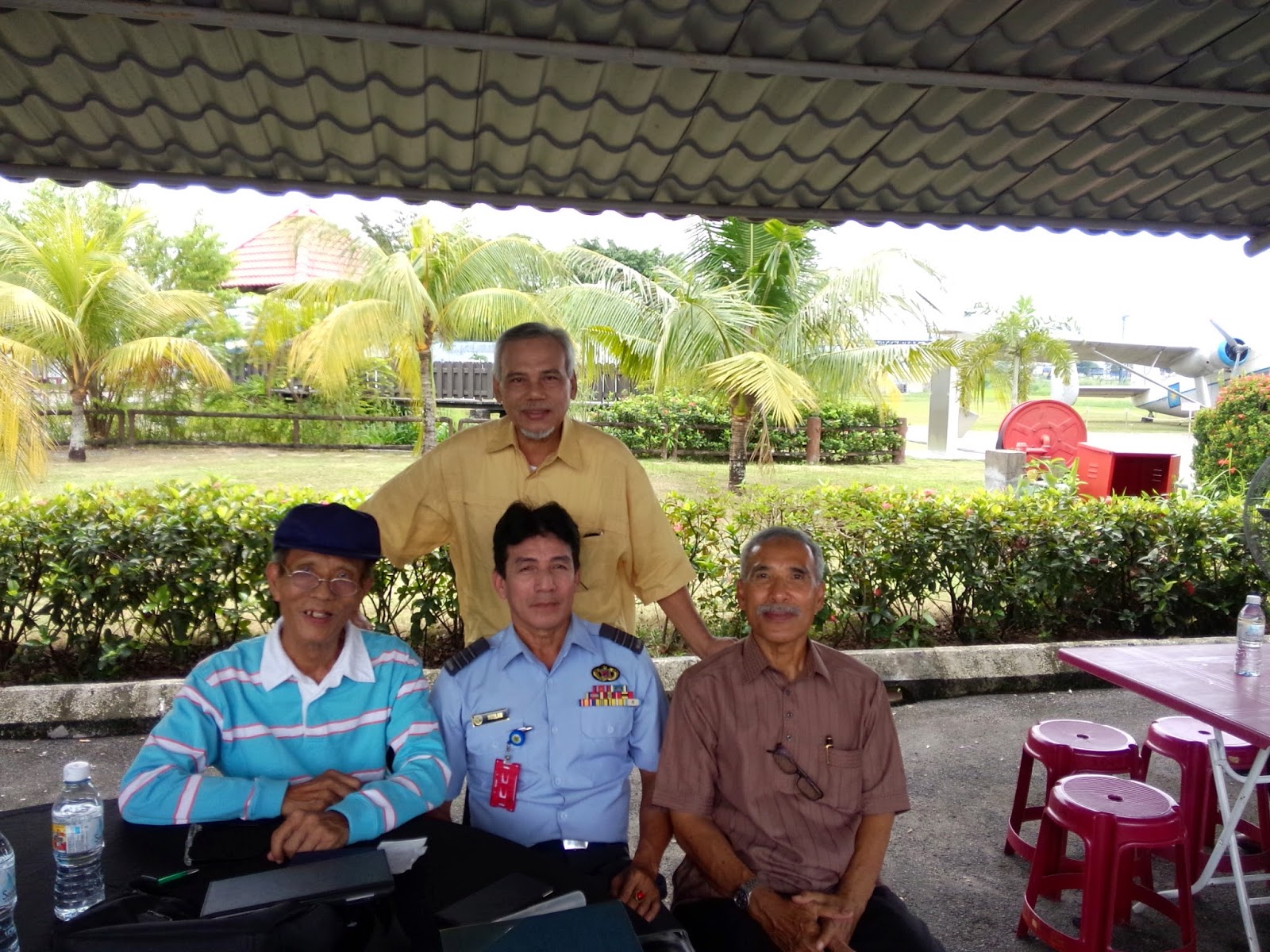 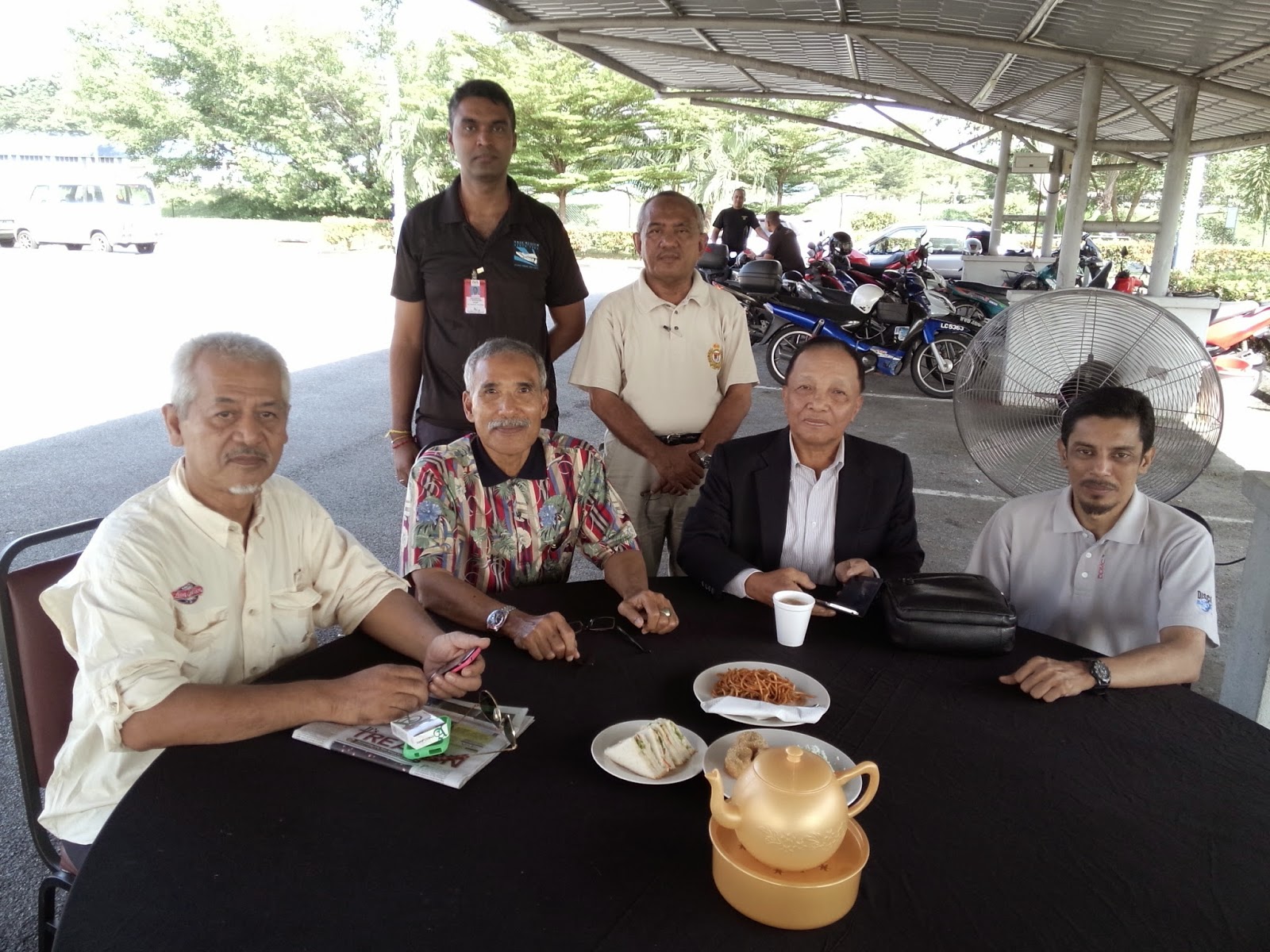 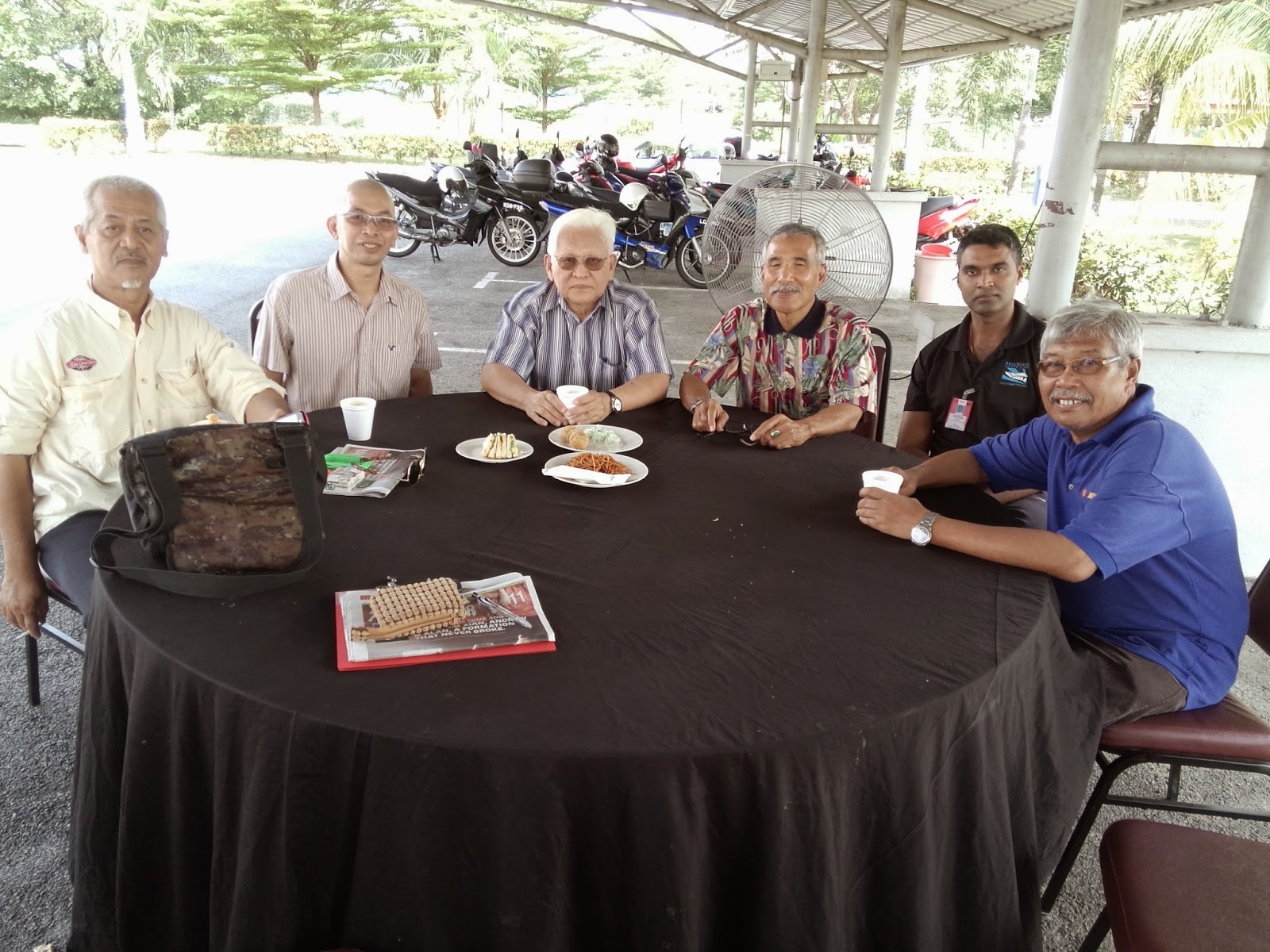 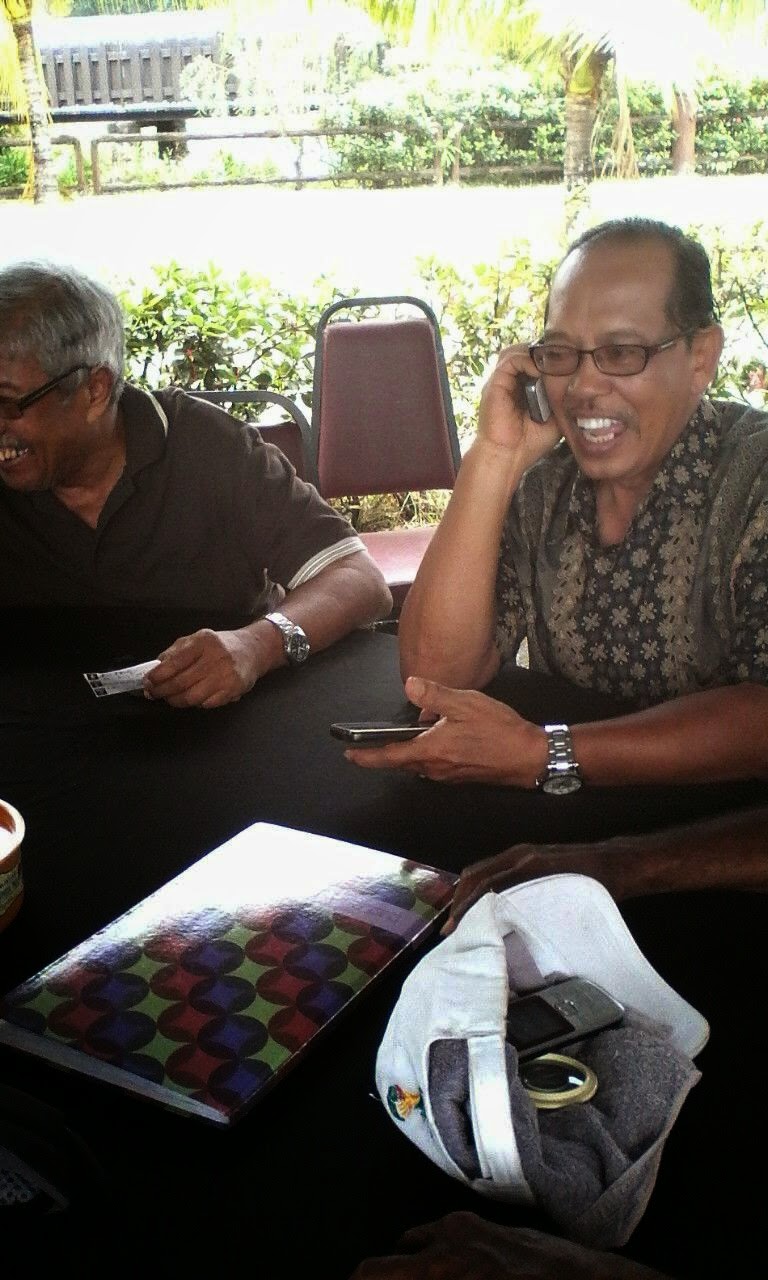 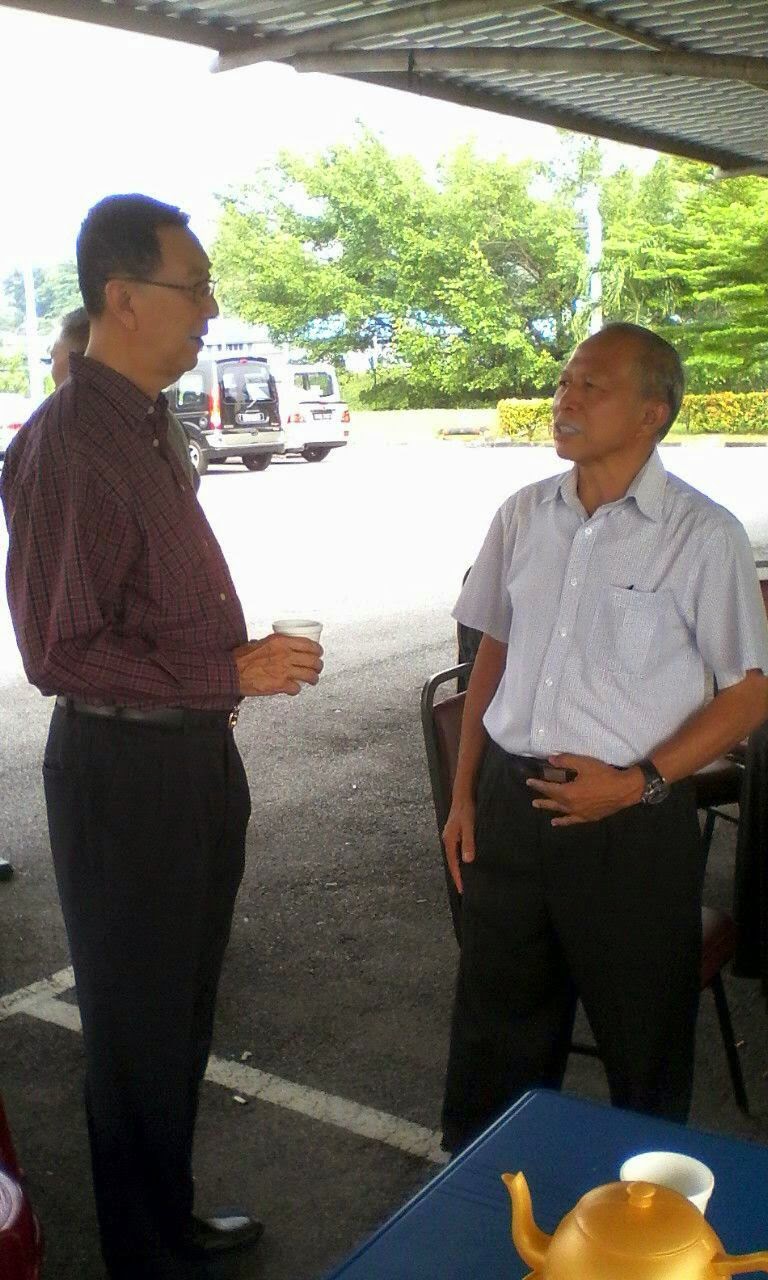 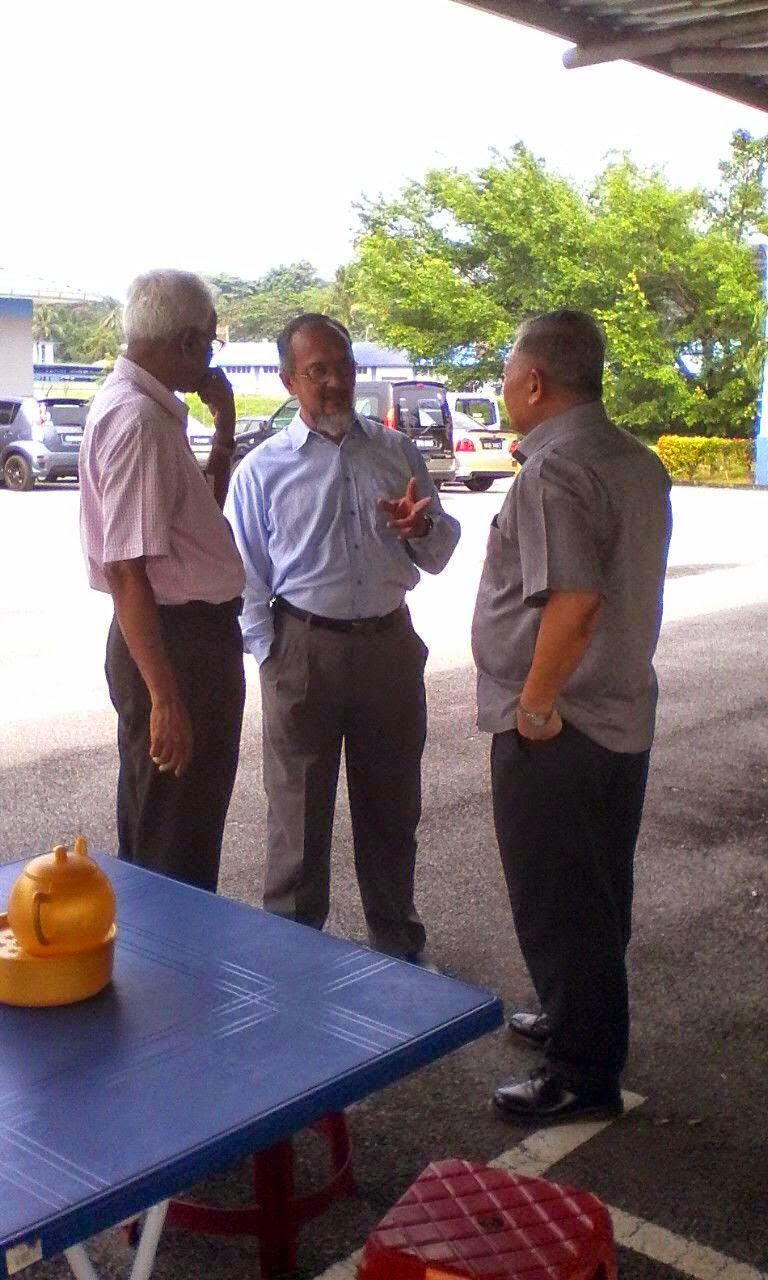 Readers...My last posting was on the broken main rotor blade (click here). Now I was told of an incident of  broken tail rotor blades by a very experienced captain, Capt Wong Yoon Fatt of MHS.

Many of my friend asked if I have ever experienced a real emergency while flying. The answer is a YES. I have todate about 18,000 plus hours on helicopters and another thousand on light fixed wing so the law of averages catches up once a while. One very serious emergency happened to me 29 years ago when I was serving in 7 Squadron, RMAF Kuching. The date was 9 Oct 1980 and I was a new "C" category captain on the Sikorsky S 61 A4 (Nuri) helicopter in the Royal Malaysian Air Force. Looking back at my log book I had just accumulated 1000 hrs at that time. On that eventful day, I was tasked to do a training flight with a co pilot. This is the time when we polish up our flying skills and in those days every pilot has to do 3 hours of training flight per month. 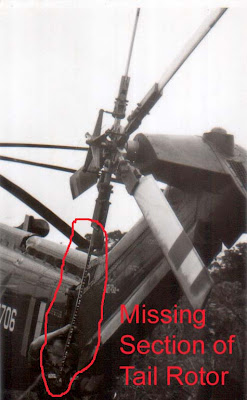 The sortie was a running change with my squadron commander. Running change means the aircraft has been started and flown and I just hop in to take the aircraft to continue my flight. When the squadron commander handed me the aircraft he told me the aircraft had some vibrations and I will have to enter the defect in the tech log after my sortie. So away I went to the training area in Santubong , North of Kuching airport. One of the exercises that we practice is an autorotation..you know just in case both the engines flame out together. I selected an area and did a practice autorotation aiming for that cleared patch. By 500 ft above ground level, I initiated power to recover from the autorotation. Suddenly, there was a "cracking" sound and the whole aircraft and the controls vibrated violently. Pedals vibrations were severe and there was limited control and instruments could not be read. I lowered the collective level and re entered into autorotaion and this time to land. Things happened very fast but suddenly everything seem to come in slow motion. Flashes of family and boyhood seems to come and go. Several MAYDAY calls were made and it was acknowledged by an MAS aircraft. 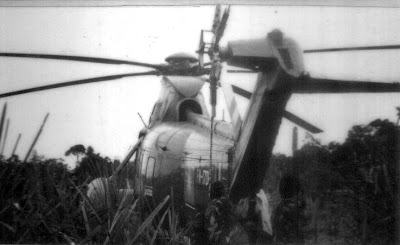 What seemed like a nice carpet of grass at 1000 ft now looks like a swamp and worst of all there were a lot of abandoned poles sticking upright. These poles were for the pepper farm and it is solid hard wood. Using all the skill that I had been taught in the Air Force, I managed to avoid the poles (otherwise it will be a satay helicopter!). Of course, my co pilot Lt M (u) Kamal (at that time) and Sgt Sharom played an important part in the successful forced landing.

After securing the helicopter we found the tail rotor blades had self destructed leaving only the spar. In those days, the tail was made of several rib pockets but after my incident (maybe a few more in the world) the blades were changed to honeycomb structures type . 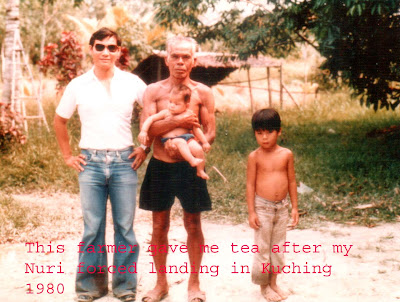 The man in this picture is the first person to come over to the aircraft after I force landed. He gave us some hot Chinese tea which was very much appreciated. I revisited him a few days later and took this photo. Within an hour another Nuri helicopter came to our rescue and we were flown back to the base. In order for me to maintain my confidence, they made me do another flight the next day..a good idea. 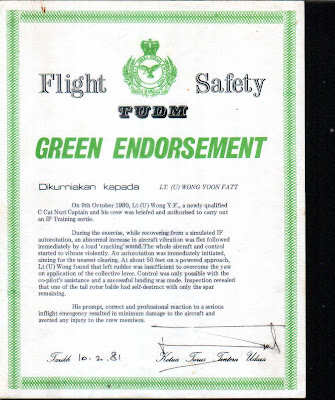 The department of Flight Safety recognised that I had done a very good job and awarded me the Green Endorsement. This is the highest award for display of airmanship and skill in avoiding major disaster. I had been truely very lucky. However, throughout the later years I had several engine failures (seven in multi engine helicopters) and many more emergencies when I was flying microlights. I will write about it in this blog later. What all these emergencies had done to me is to make me a more matured and conservative pilot and not to take things for granted. In flying, there may be no second chance and as pilots we must take our chosen profession seriously.


Visit Capt Wong's blog at http://pythonjoe.blogspot.com/ and  www.rusacamper.blogspot.com
Dear Friends....If you could spare a few minutes of your precious time, why not pen down your experiences and email them to me. It is high time  to let the rakyat know the contributions towards nation building via thee irons birds for posterity. And, if I have enough materials, I might seriously think of publishing another book, insyaAllah.

A request for a story fulfilled....

MAIN ROTOR BLADE BROKE OFF IN FLIGHT INCIDENT On 16th January 1991 Near Bukit Gambir: By Capt Tien Sen An

On the 16th January 1991, I took over Nuri helicopter M23-12 from Capt Ravinder who did a VIP flight in the morning. My task was a comm flight to Singapore.  We took off from Sempang (RMAF KL) after lunch with 12 POB for Singapore. At the same time I was doing a Standard Checked on Capt Saadan, who was a D Cat captain who did a conversion from Alloutte captain to Nuri Captain and my crewman was Sjn Gobi Raja. I was on the Left seat.

As we passed a beam of Muar over Bukit Gambir, suddenly there was a very loud “bang”, as if the aircraft was being shot at and the aircraft immediately went into very severe vibrations, I reduced speed and lowered the collective quickly to autorotate. Aircraft vibrations were so severed, all the caution and advisory lights came on and off, it was like Christmas tree and then all the controls became very hard. Aircraft started to roll to the left, the retreating side and diving down. I told Capt Saadan to follow me  through on the controls as we tried to level the aircraft.

As we were going down, we only saw the ground. We saw the trunk road, a school field and rubber estate. As the vibrations were so severed and the controls were hard over, I decided to go for rubber estate for the landing as it can cushion the impact. Just before we crashed land the aircraft, suddenly we saw a row of houses in the rubber estate in front of us, we quickly pulled the cyclic to the right and aft as hard as we can to flare the aircraft to avoid those houses and reduce the rate of descend to cushion the landing. The aircraft responded and ………we saw the sky. We just continued to pull on all the controls very hard before we crashed to cushion the landing.

While going down, there was a fast flash back of my life in my mind until the aircraft crashed and the flash back stopped. (Later I checked with Capt Saadan and Sjn Gobi Raja, they also experienced the same thing). As we crashed through the rubber trees, I covered my face with my hands and closed my eyes for the impact. Aircraft came to a sudden stopped; I opened my eyes and saw the windscreen cracked and can’t belief that I am still alive. And I looked at Capt Saadan, he also was alive. I quickly pulled both the speed levers back to shut off and shout for evacuation. As I looked back to the cabin, I only saw Maj Azmi, our Officer mess PMC /OC admin of KL Base still trying to climb the steps on the front passenger door to get out. All the other passengers had evacuated. I jumped out from my seat, and then pushed Maj Azmi out off the aircraft and shout at Capt Saadan to get out, but he was still jumping up and down on his seat as he forgot to unbuckle his seat belt. I shouted at him “buka seat belt”, he did as told, and then he evacuated from the aircraft.

After evacuated the aircraft, I briefly checked around the wreckage and did a roll call for all on board and checked whether anyone was injured. It was a great surprised that none of the passengers was injured except my crewman Sjn Gobi Rajah, his palm has a cut because he was thrown forward to my seat, left seat; which has a weapon rack installed for crew’s weapons storage during the impact. He was thrown forward because he was on a monkey harness. He walked around to ensure everyone was strapped in before the impact (He did a very good job to ensure every passenger were strap in. A few of the passengers who were aircrew help him out as well to ensure all were strapped in), and I had a back pained.

After the roll called and checking on injury, I walked round the crashed aircraft again which was leaning against a tree to check on the damages in more details. I found the tail section was broken; four Main Rotor Blades broken and left with the root ends only with some part of the blade sleeve and another blade still intact at the rotor hub, but the rotor hub already opened up. The blade was without part of blade tip section. Both engines cracked and oil was leaking out. Left undercarriage collapsed as the aircraft landed on the left side. One small tree stump pock through from the bottom of the left side and hit the bottom of the left seat (Luckily it was an armoured chair, if not my back side “kena sula”). Whole aircraft was badly damaged. 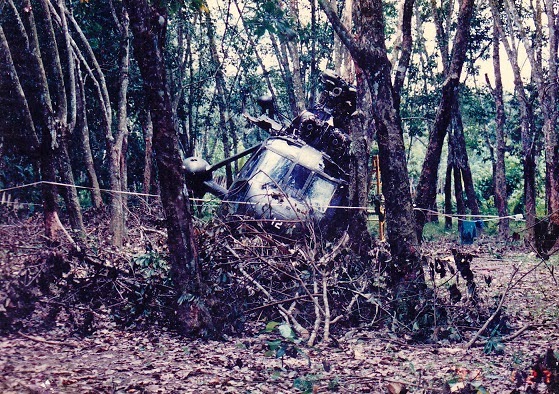 I went to the nearest house, a Chinese rubber tapper’s house to ask whether they have any house phone which I can make calls to 10 Squadron. The house owner was very helpful, told me to use the phone and offer us drinks as well.

I called up 10 Squadron Ops room. WO Mohana answered the called and I told him “I just survived a crashed, all on board are safe, and we need the SAR aircraft”. I think he was shocked and disbelieved, he asked me whether I am joking. I told him no, I am not joking. He then asked again, “how was the aircraft?” I told him, “it’s a complete write off.’ Then I passed him the coordinates, contact number of the Chinese small holder and told him to inform POTU.

Not too long after I made the phone call, a Police Range Rover came by (I think the kampong people must have informed the polis station about the crash) and asked what happened? I told the policemen we just crashed and I need to go to the police station to make a report, and also make a report to POTU as well.

About an hour plus after the crashed, the first SAR aircraft to arrive was from TUDM Kluang led by its Commandant, Lt Col (U) Goh Seng Toh, and the second SAR aircraft was from 10 Squadron led by Lt Col (U) Affendi Mustapha, which arrived about half an hour later.

I handed over the crashed aircraft to Lt Col (U) Affendi, CO of 10 Squadron. Later, all of us were airlifted back to KL base and send to IAM for medical checked up. 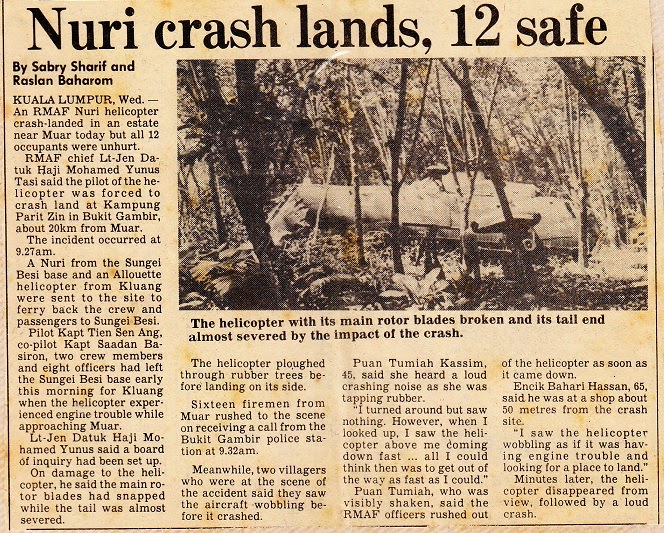